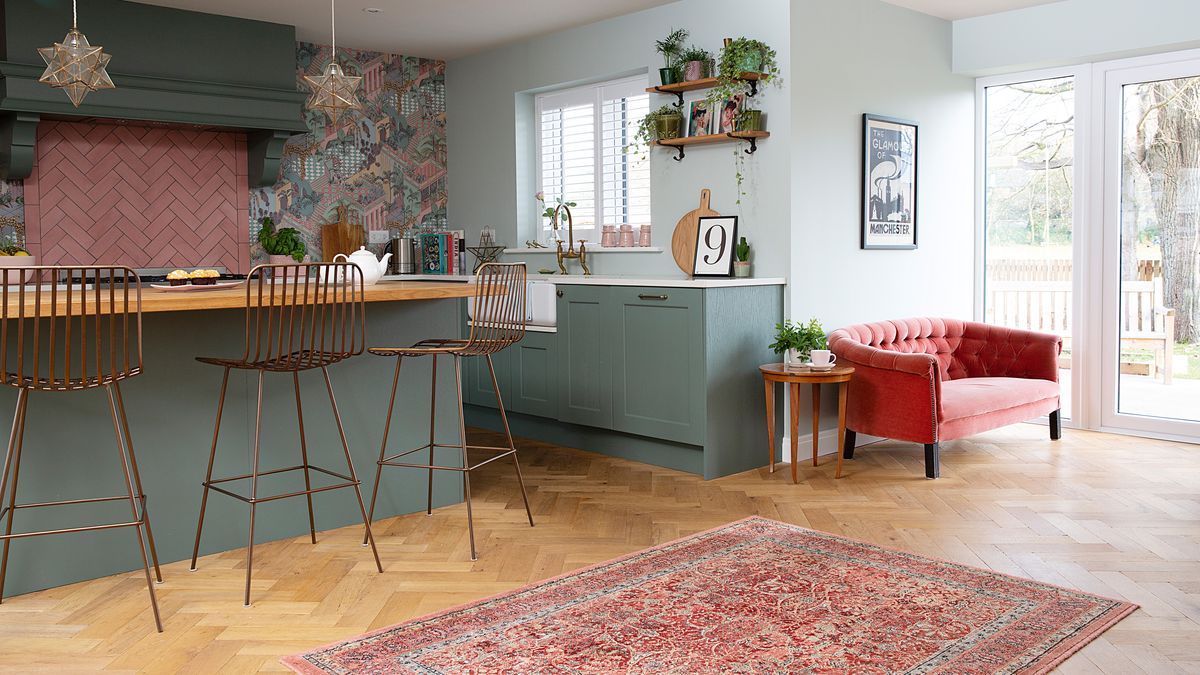 When it comes to decorating kitchens, it makes sense to paint or tile. Walls must be impervious to the culinary chaos that can be thrown on them – the splashed sauces, the spit of oil, the steam from kettles or boiling water, and the tidal wave of smoothie / soup from the time you forgot to put the lids on on the mixer.

But Lucinda Holt wanted paint on her newly plastered back wall. She wanted patterns. She wanted wallpaper! “I had my heart set on wallpapering the back wall from the first day I tried to inject a character,” she says. “Our family thought we were crazy because it was impractical. My dad still says, “When are you going to get tiles all around?”

But Lucinda did it, and the result is a one-of-a-kind looking space with a fabulous setting that looks big designer-style but is surprisingly on a budget thanks to some clever purchases. That’s how she did it.

Check out our expert guide to learn how to design an open kitchen.

After having twins and a family of five, Lucinda and her husband Sam sold their 1930s house in Crouch End and left London for a little more greenery and a slower Lancashire life.

They bought a five bedroom detached house in a small gated community near Preston that is off the M61 and is ideal for Sam’s job of managing musicians and DJs, which requires a lot of travel.

Lucinda wanted to create a country-inspired eat-in kitchen in the heart of her new home, inspired by Devol kitchens and with fabulous wallpaper as a showpiece.

“Since it’s the first thing you see when you walk in the room, I wanted a kitchen with an impact and a wow factor,” she says. “When I was working in Clerkenwell, I went to the Devol showroom and fell in love with their shaker-style kitchens – that was my inspiration.”

“We’re surrounded by woods with four peacocks next door, so it felt like we were getting really rustic in Belfast with natural oak floors, dark green units with antique bronze handles and a sink.

‘The developer put us in touch with a local installer, Simply Insignia in Preston. They showed us four kitchens in about five different colors, many of them gray. When I said I wanted dark green and brass they told us it wasn’t fashionable! In the end, they really worked with us and let us tailor it. We paid a little more to have the units painted in Farrow & Balls Green Smoke and chose our own tiles and floors.

“I met an old friend who has a small interior store called JF Interiors and she had loads of wallpaper to choose from. I fell in love with the Miami design by Cole & Son as it goes perfectly with the color of the tiles and units. At some point we thought about putting shelves on either side of the stove, but it would have been a shame to cover the lovely paper. ‘

“We’re still a little overwhelmed by it. Our utility room is larger than our previous kitchen, so we have more space than ever before. The only thing we could add is a built-in bench and window seat to create a cozy dining area, but we couldn’t be happier with the result. It’s like the Devol kitchen I wanted, but at a fraction of the price.

“Friends and family love the new kitchen – it’s so sociable. In summer we can open the doors to the courtyard garden and the whole family can come over for Christmas. I spend time on the sofa looking at the sky. It sounds trippy, but I couldn’t do it in London.

“And my dad shouldn’t have worried about the lack of tiles – I splashed chocolate cake mix on the paper the other day and it was just wiped off.”