A three-year study of tubercle formation, the leading cause of cast iron pipe failure, found that the rate of accumulation was fastest in the first year compared to the following two years. The study found that there was no relationship between the tubercle height and the corrosion / pitting depth on the pipe wall. (Photo credit: Schekinov Alexey Victorovich / Wikicommon)

Publisher’s Note: In the first part of this series, the basics of sanitary processes and their connections as well as typical sources of error were dealt with.

Cast iron pipes (CIP) often document tuberculosis, the gradual build-up of iron hydroxide on the inside surface of the pipe that disrupts the flow, as the cause of pipe failure. 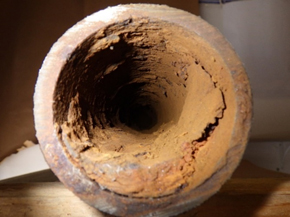 Tubercles do not come from the CIP; they are formed from iron oxide in water. Instead of the pipe material being “removed” as most of the corrosion occurs, the tubercles are deposits on the pipe walls. The tubercle begins with bacteria that form a bacterial mucus layer that feeds on manganese and iron in the water. The mucus layer builds up over time and the red-brown products solidify, reducing the pipe inner diameter and flow capacity.

A three-year study of tubercle formation found that the rate of accumulation was fastest in the first year compared to the following two years. The study found that there was no relationship between the tubercle height and the corrosion / pitting depth on the pipe wall.

The thickness of the tubercle within a pipe does not reflect the extent of pitting on the surface of the pipe wall. The tubercles and accumulation can be removed by appropriate cleaning without compromising the structural integrity of the tube.

The influence of government regulation

Government water use regulations have impacted sewers and drainage pipes in plumbing systems in residential buildings. The Energy Policy Act of 1992 (EPA92) restricted the water use of plumbing fixtures such as showers and toilets.

Prior to EPA92, most toilets used 3.5-5 gallons of water per flush (gpf). The new regulations require 1.6 gpf. The new regulations also reduced water consumption in shower heads from 2.75 gallons of water per minute (gpm) to 2.5 gallons. The water consumption in taps decreased from 2.75 gpm to 2.5 gpm. The Energy Independence and Security Act of 2007 (EISA07) limited dishwashers to 6.5 gallons per cycle (gpc) in standard models and 4.5 gpc in compact models, a decrease from 14 gpc before the new regulations. The EISA07 also reduced the gallons per load (gpl) from 41 gpl to 26.6 gpl in washing machines. The ordinance achieved the goal of saving water, it also had the unintended consequences of less effective flushing and the removal of solids that led to clogging.

Homeowners contribute to pipe corrosion in two circumstances: loading characteristics and the substances discharged into the drainage line.

“Load” in plumbing refers to the number of drainage fittings (DFUs), such as toilets, bathtubs, sinks and washing machines, that contribute and direct the flow of water and create a load effect on the plumbing system.

The selection of the pipe diameter depends on the intended amount of water and solids that is to be transported. In a house with a kitchen and two bathrooms, the drain pipe is typically 3 inches in diameter. Outside the house, a 4-inch diameter pipe is used where several drain lines converge before being drained onto the street.

The smaller the load, the worse the performance. A one bedroom, one bath home would not benefit from a 4 inch diameter drain pipe because the volume of water and waste may not be enough to create enough turbulent flow to flush the waste down the sewer system. The load is particularly relevant when garages are converted into living spaces or extensions are built for tenants or older parents. More DFUs can exceed the original drainpipe capacity, adding to obstacles and creating congestion. Load changes are also important when the house is full. The relationship between the discharge volume flow and DFUs is not uniform, but varies depending on the number and operation of the valve units and can contribute to overflows.

Residential sewer systems generate significant amounts of toilet paper, durable wet wipes, and other consumer flushable items (FCPs). In combination with factors such as pipe incline and reduced flush volume, significant effects on the sewer system in residential buildings can be expected.

Toilet paper additives (binders, fillers, adhesives and color pigments) also hinder their dissolution. Other factors affect the dissolubility of toilet paper in sewer pipes, such as the turbulence in the water and each brand’s unique chemical properties. Premium toilet paper offers softness and durability; however, they disintegrate more slowly than cheaper and thinner brands.

Toilet paper sheets per use have also increased, making it increasingly difficult for toilet paper to dissolve in sewers as the number of sheets used per flush increases. Studies have shown that a minimal increase in pipe slopes and an improvement in the rate of decay of FCP in consumer products can improve the functionality of plumbing systems. Regular maintenance to remove the buildup in these drain lines is also beneficial.

If a plumber is asked to examine a drainage system in a residential area, the following tasks will help you with your assessment.

Donald Dunn is a Florida licensed master plumber and president of Florida-based My Plumbing Company. In addition to providing plumbing services for private households and businesses, he specializes in plumbing-related forensic and diagnostic analyzes and teaches insurance professionals and construction scientists the basics of plumbing and the causes and causes of plumbing.

Dr. Ralph E. Moon, Ph.D., is a forensic scientist and a regular speaker at insurance conferences and seminars. His current research interests are in the study of wood deterioration rates and metal corrosion in building materials and sanitary components used in residential construction. He is employed by NV5, Inc. in Tampa, Florida.

The ‘Burn Scars’ of Wildfires Threaten the West’s Drinking Water

Rosie on the House: Taking the plunge on a plumber | Home + Life + Health