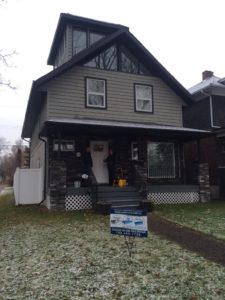 The drain pipe of this historic 1911 home has been restored without digging the foundation or turf.
Photos courtesy of Nordic Mechanical Services

It was a misaligned pipeline that caused tenants to a historic 1911 home to use Nordic Mechanical Services (NMS) when they faced a blockade in 2016. The tenants had a 100mm diameter clay and cast iron side sewer that led to the main street of the city in the Old Strathcona neighborhood of Edmonton. The tube in question fell victim to excessive root infiltration that blocked 60 percent of the sideline. The line was under the foundation of the house, and since it stayed under the finished landscaping, the homeowner looked for a trenchless, non-digging plumbing solution.

Homeowners had two options: traditional digging and replacement, or using a CIPP (cured-in-place pipe) liner, which was inexpensive and did not require digging. The homeowners went with the latter. This pipe lining process avoided extensive damage and reconstruction of the foundation and landscape, which can be lengthy and expensive.

Residents faced many complications with their pipes, including structural problems such as root infiltration. Structural defects in the form of cracks or corrosion appear in many pipes. A critical problem, however, is misalignment in pipes, which occurs when the pipes are not properly connected together. This could be caused by a slight shift in the floor that supports them. This can prove harmful to the pipe and lead to its collapse. In this case, the tenant with the restored century house, the misaligned pipe allowed an excessive number of tree roots, causing the sewer to lean.

Before NMS could perform the CIPP process, their team had to clean up the abundance of tree roots using pneumatic cutting tools. The tool used rotates at 2000 rpm and can be set to 90 degree rotations in pipelines. While multiple cutting heads can be attached to it, it runs at 40 cfm. This pneumatic cutter helped remove the excess root. Once the pipe is cleaned it is safe to proceed with the CIPP process. 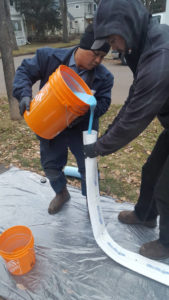 The CIPP lining is a pipe rehabilitation technology. Not only is it inexpensive compared to traditional replacement, it’s also an environmentally friendly option as there is no need to idle heavy equipment or remove dirt and pipes to get to the landfill.

As it is a trenchless technology, this lining can be installed without digging. By using an existing access point such as a scrubber, CIPP can be used on a wide variety of pipes including clay, cast iron, polyvinyl chloride (PVC), concrete and orangeburg, a bituminous fiber pipe made from layers of wood pulp and pitch pressed together (commonly used from the 1860s to the in the 1970s).

The CIPP process uses an epoxy-saturated felt liner that is pulled into place within the existing pipe and allowed to cure, essentially becoming a “pipe within a pipe” although it is designed to function as a stand-alone pipe should the existing host pipe degrade. CIPP is a seamless solution to solving pipe problems that prevent root infiltration and cover staggered pipes. During this project, the pipe lining process was completed without disrupting or damaging the home or landscaping.

Alyscia Sutch is Marketing and PR Manager for clean technology company Aquam and its subsidiaries. She has a degree in public relations and works closely with construction, plumbing, mechanical and utility companies that provide infrastructure support, rehabilitation and diagnostic solutions for infrastructure renewal, both inside and outside the infrastructure. Sutch can be reached by email at [email protected]

Control The Content You See On ConstructionCanada.net! Learn more.