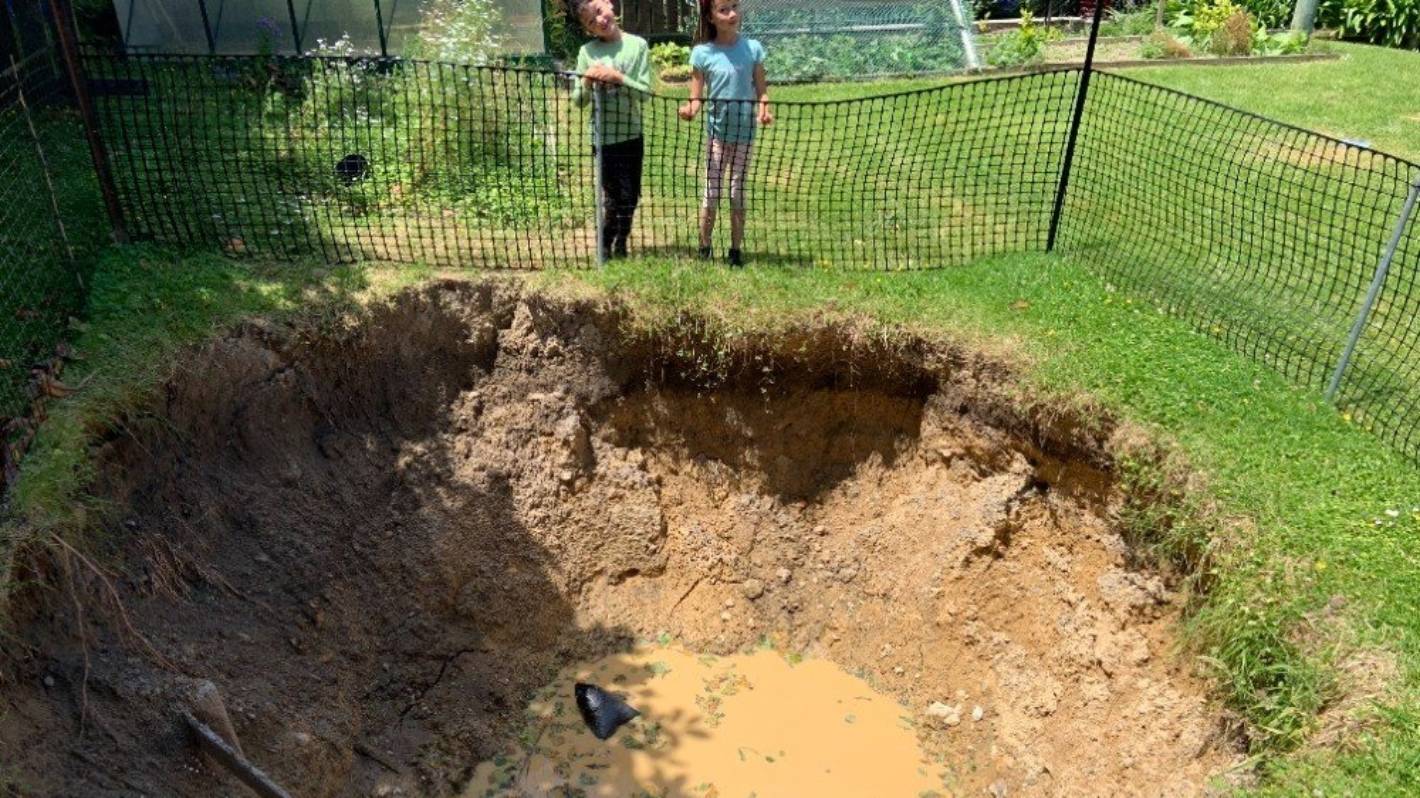 Craig Ferguson’s 7-year-old twins Ava and Max inspect the four-meter-high sinkhole in their back garden caused by an underground pipe burst.

In a back garden north of Wellington, a huge sinkhole has appeared that has swallowed a fence and reached a depth of six meters.

Although the hole was caused by a pipe that broke underground, the local Wellington Water Authority originally claimed that the pipe was installed as part of a private pipeline network, even though it worked as part of the stormwater system and was not their problem that needed to be fixed.

What started as a small indentation in the lawn of Craig Ferguson’s house in Pukerua Bay in 2017 grew into a four-meter-high sinkhole after last week’s flooding.

Ferguson’s two children, 7-year-old twins Ava and Max, found it quite exciting at first, but after the hole swallowed up a makeshift fence and became too big to be properly covered by their trampoline, the fun was over.

Ferguson first contacted the council in September 2017, in the middle of a very wet winter. “I knew there was a pipe going under the garden, I could see it on the city maps,” he said.

He immediately put up a small wooden fence so that his children could not fall into it, and laid planks over the hole.

What started as a small indentation in Craig Ferguson’s lawn and was first noticed in 2017 grew into a large sinkhole.

Wellington Water visited the pipe and ran a camera from a manhole down the street to see that the pipe had collapsed just below the garden.

What came next was a letter from The Property Group, on behalf of Wellington Water, saying the property to the pipe had been investigated and it was found to be “a private corrugated pipeline.”

The letter sent in September 2014 explained that an earlier inspection of pipes on a neighboring property had shown years ago that the previous landowner had laid pipes for a private drain around 1984.

“The pipe installed on your property is assumed to have a similar history,” it said.

“Based on the above, the pipe is owned by you as the property owner and you are therefore responsible for its maintenance.”

But Ferguson said he could clearly identify the pipe on GIS maps and they had been assigned a council reference number. And he would probably be right.

Years passed and the hole remained until the flood in early December increased it from one meter to four meters wide. “It swallowed the fence,” said Ferguson. “There is no evidence of it.”

Volunteer firefighters were in a difficult position rescuing a calf stuck in a sinkhole in Golden Bay. The video was first released in November 2019.

Ferguson paid for a private contractor to inspect the pipe Thursday, but the contractor told him not to touch it because it was a community asset. Later that day, Ferguson said he had been contacted by Wellington Water to tell him it looked like a council asset after all and they would be in touch with them in the New Year.

However, Sean de Roo, the design engineer for Wellington Water’s client, reiterated that the storm sewer was a private good and the property owner was responsible for repairs. There was no obligation to reverse that decision, he said.

In the meantime, the Fergusons spend Christmas with a sinkhole in the garden.

“I’m worried about the kids,” he said. “If you [Wellington Water] Had it fixed four years ago it wouldn’t be that big of a problem. “

5 Of The Most Affordable And Efficient Kitchen Sinks Available Online