House deconstructed to help preserve it 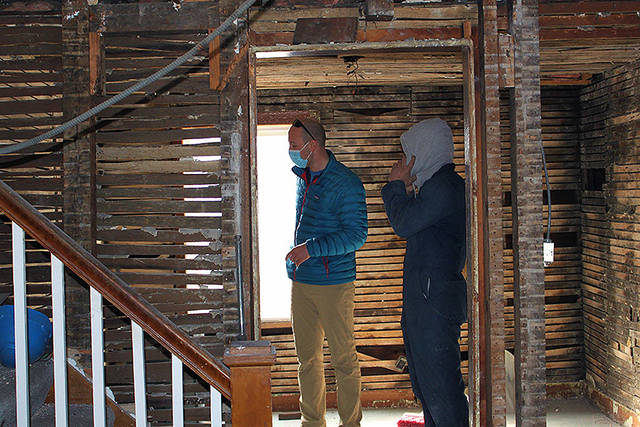 NAPERVILLE (AP) – The life of World War II hero Arnold “Arnie” Massier will be preserved in Naperville, and perhaps across the country, instead of ending up in a landfill.

When Massier died in February 2020 at the age of 97, neighbor Jennifer Reichert was executing his estate, including his house in Naperville, which is believed to date back to the late 19th century.

Reichert said that when she was about to sell the historic house, she couldn’t bear to see it demolished and taken to a dump. She contacted BlueEarth Deconstruction to disassemble it so that its contents could be preserved or reused.

BlueEarth is focused on taking apart buildings piece by piece and rescuing cabinets, windows, doors, hardwood floors, mechanical systems, appliances, lighting and plumbing fixtures, and wood from the frame, said operations manager Colleen Feeny. Often up to 90% can be salvaged and reused.

A built-in stall, the front door of the house, and all of Arnold Massier’s possessions go to Naper Settlement and are on display in an upcoming World War II and future exhibits at the Naperville Historical Museum.

“This place is different from every single one. It’s built differently than any building we’ve ever seen, ”said Filyo.

As an example, Filyo points to the 3 and 4 inch lumber that the walls are made of. “It looks like it was done right where they cut the trees,” he said.

Wood with the bark can still be seen in parts of the walls and in the basement.

“The wood is probably the most interesting part of the house in terms of recovery,” said Feeny. “There are about 75 trees worth of lumber in Arnie’s house that were probably felled around 1880 or so.”

Furniture makers love old wood, she said, because it’s harder and doesn’t expand and contract like new wood does in a lumber yard. Older wood has limited availability, so there is a lot of value in it, she said.

“None of this is going to be in a warehouse,” said Feeny. “I would be surprised if it goes to the store to be sold that they don’t sell it within a week,” she said.

Reichert said it would only be appropriate to have wood from the house recycled as furniture since Massier and his father and brother worked as furniture makers at Kroehler Manufacturing Co., which was once Naperville’s largest employer and second largest furniture maker in the 1940s in the United States.

She said she wished every piece of furniture could have a bit of history for the new owners.

“One day you will sit there and have a beer and you will have no idea that your coffee table used to be the ceiling of a room of people who lived here,” said Reichert.

Massier told her that the bulk of the house – a living room in the front and a kitchen / dining area in the back – came from a building that was rolled on logs onto the 4-acre property in the 1910s.

It appears that two bedrooms were added once after the house was furnished. An outbuilding and a barn were built in the back yard.

Massier’s parents, Mary and Adam, would have saved and saved to take such an extravagant move, Reichert said.

The frugality, she said, came from her roots as two orphans who emigrated from Bukovina, a region that is now divided between Romania and Ukraine.

“His family came from the old country. They had nothing. You scraped it all up. His mother and father actually met here, but they grew up in a similar place, ”said Reichert.

The Massier family survived by adopting the “don’t waste, don’t want”, “use up or wear down” and “do or forego” philosophies, she said.

While the main floor was the centerpiece of the family activity, the second floor became more of a haven or work area than an extra bedroom as it was isolated, she said.

Massier shared stories about how he and his brothers played upstairs and his mother used it as a sewing room where she made clothes, she said.

“You had a bathtub up here,” said Reichert, standing in the attic. “They made beer, whiskey, and wine in the bathtub, especially during Prohibition, which they shared with everyone.”

When Adam Jr. and Arnold Massier returned after World War II, the young men decided to live with their parents and the family added a kitchen and bathroom in the 1950s. A porch came later.

Reichert said she was saddened to see older Naperville homes being demolished over the years.

“I grew up in this neighborhood. After Arnie’s house is taken apart, the only original house on the block will be my mother’s house next door, ”she said.

Massier was always fascinated to see how the houses he had once built fell down at some point, Reichert said.

She remembered him and said, “I remember when Mr. Jones went out and felled this tree. He made that mantelpiece, and can you believe they just put the dumpster on? “

Then she knew that the massage house could never fall victim to the same fate.