House of the Week: Owners call their relationship with Auburn Victorian home a ‘match made in heaven’ 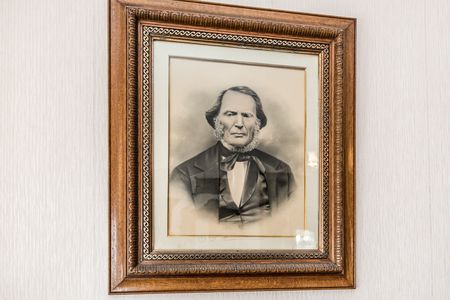 AUBURN, NY – Reaching retirement age didn’t mean it was time to think about slowing down for Harry and Sunnee Dow.

The Pennsylvania couple once ran a bed and breakfast and wanted a different location as a “retirement project” when they moved to upstate New York to be closer to their children and grandchildren.

They settled in Auburn in 2013 and spent a weekend looking for possible spots in town. After looking at the fifth Queen Anne Victorian at 161 North Street, built in 1886, the search was over.

Sunnee loves Victorian homes and Harry admits that he was “infected” by his wife’s enthusiasm.

“I just love her,” she said. “I really appreciate your character.”

This house had character in every corner.

“The architecture is stunning,” Harry said of the house. “It’s a different kind of craftsmanship.”

It features a wraparound porch, double-thick foundation, and balconies.

“I thought it might be what we wanted,” said Harry. “It was a match made in heaven.”

They made an offer the day they saw it.

But it would be a long journey between selling and opening the White Swan Bed and Breakfast.

The property was derelict after standing empty for a few years.

Outside the courtyards were overgrown and inside it was almost “barren”.

The Dow’s traveled north whenever they could to work. They improved the installation, wiring, air conditioning and insulation.

Harry built a new two-car garage to make sure it looked like it belonged to the original house.

Inside, Sunnee called the woodwork inside “thirsty” and polished it with lemon oil.

They were able to incorporate much of their furniture from their previous bed and breakfast there, but they also spent a lot of time looking at antiques and looking for items that fit the authentic historical feel they were looking for.

He gives his wife the full honor.

“Sunnee was the brain,” he said. “She’s a decorator and I’m wrong most of the time.”

– Harry and Sunnee Dow restored the Queen Anne Victorian at 161 North Street in Auburn to its original glory with updated modern amenities and ran it as the White Swan Bed and Breakfast. This portrait hangs in the living room. It’s Edwin Davis, Harry’s great-great-uncle. He was New York’s first executioner and electrocuted 240 times to Auburn and Sing Sing Prison between 1890 and 1914. Courtesy Monica Browning PhotographyCourtesy Monica Browning Phot

(Harry said he was the “fix-it guy” and enjoyed getting his hands dirty. He’s in charge of a work of art in the house. The imposing picture of an elderly man in the living room of the house is Harry’s great-great-uncle. Edwin Davis who was New York State’s first executioner when the electric chair was made the state’s instrument for the death penalty, and was involved in 240 executions from 1890 to 1913, including the first electric chair death, William Kemmler, who died on was taking place just down the street from their house. “We took him back to Auburn,” said Harry.

It would be almost a year before they moved in and greeted guests.

Harry says her Seven project was “fun and entertaining”.

He admits he likes to “step back” and admire what they have achieved, although he admits it is not done yet. The kitchen, for example, doesn’t have all of the Victorian frills.

He will stay in Auburn, where he is serving as a part-time pastor in one of the town’s churches.

Will he ever try to do another big retirement project?

“No,” he says quickly before adding, “well, not on that scale, but who knows.”

For more information on this property, please contact Carole A. Dwyer, agent of Howard Hanna Real Estate Services. You can find your contact information below.

Monthly Mortgage: $ 1,022 (based on this week’s national average rate of 3.10 percent according to Freddie Mac for a 30-year fixed-rate mortgage with a 20 percent down payment. Fees and points not included.)

Kitchen: The owner Sunnee Dow used this kitchen to cook for her guests at the White Swan Bed and Breakfast for seven years. It has new equipment that is not commercially available. The room is one of the few that has not been renovated. It was on the list, mentioned Harry Dow. There is a center island and plenty of storage space.

Living Areas: Built in 1886, this Queen Anne Victorian is in “pristine condition” with “modern amenities and system updates”. Visitors enter an anteroom with heavy cherry doors and stained glass windows through the entrance doors. The amazing staircase with intricate wood carvings is behind the doors. The formal dining room has a built-in china buffet. There is a wood-burning fireplace in the dining room, salon and living room. Original cherry woodwork, brass fittings, ten foot ceilings, wooden floors, and original art tiles. The huge attic offers plenty of storage space and is even decorated with gables and stained glass windows. The walk-in basement has Harry’s office, workshop and half a bathroom. A clean burning coal stove keeps the room warm.

Bedrooms: There are five bedrooms in the house, four on the second floor and a small one on the first. The master is quite spacious and has a walk-in closet with floor-to-ceiling drawers and cupboards. It has its own fireplace.

Bathroom: There are three bathrooms and a half bath.

Outdoors: The property sits on 0.29 acres in Auburn. It has been designated as an industrial park so that it can be used as a business. Harry had a new two-car garage built, with a steep roof for storage that compliments the look of the original house. The beautiful wraparound porch is very inviting. There are new picket fences and a large garden shed on the site. The location is convenient to Auburn, the Thruway, Finger Lakes and the area’s wineries.

House of the Week: The owner is converting the old doctor’s office in Westvale and giving it a “fresh start”.

House of the Week: The historic Pulaski Bed & Breakfast The 1880 House overlooks the Salmon River

House of the Week: The owner designed a backyard paradise for his children in their Fayetteville home

House of the week: The owner calls her brick house in Camillus “Heaven for me”.

If you know of a beautiful or interesting home that is currently for sale, please submit a nomination for it to be listed as the future home of the week. Email the listing to [email protected]

Do you know older homes in Central New York that have gotten into tough times but have great potential should they be restored to their original glory? A fixer upper with a lot of potential? Consider nominating them for our new Save this Home feature, which introduces the great homes of the past around central New York that need saving. Send nominations to [email protected]