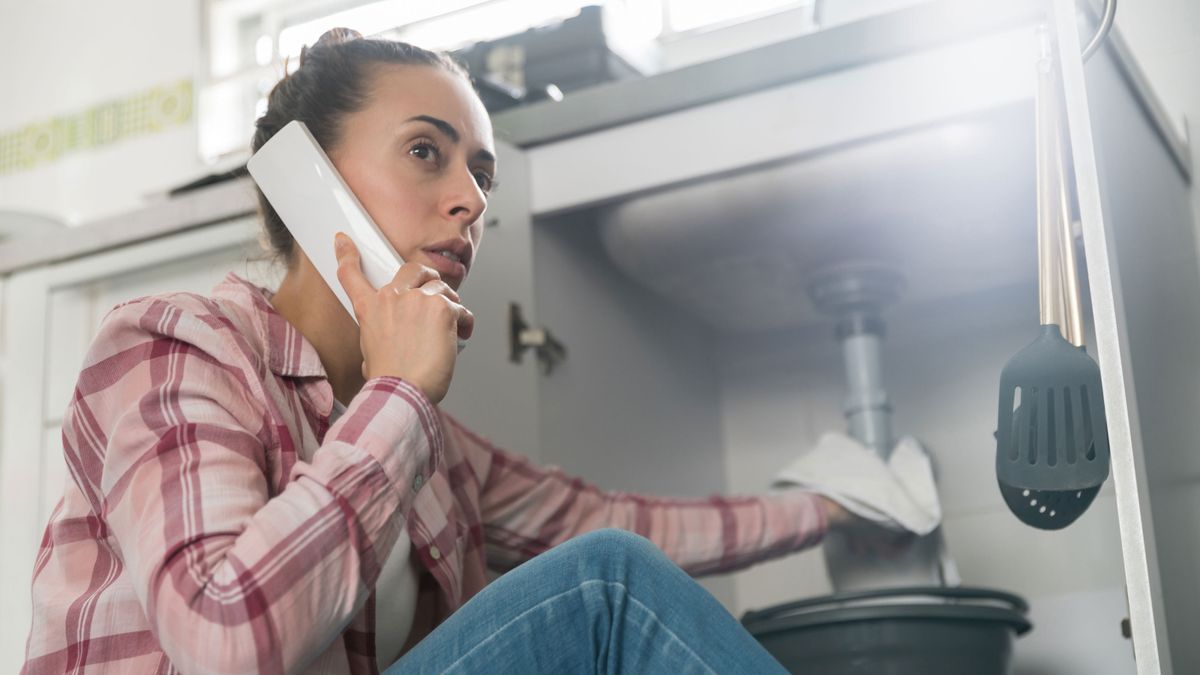 Leaking pipes are a common cause of water leaks in an apartment. And of course, every leak must urgently be repaired in order to avoid damage to the furnishings and even the structure of the house as well as the formation of mold, which can set in quickly after a leak.

Chances are, you can stop the water yourself and make this a relatively simple home repair. However, it is also important to know when to seek professional help to stop the problem from getting worse. We asked the experts to explain why pipes can leak and what measures you should take in your home to prevent water damage.

Why does water leak out of a pipe? A leak can be caused by a number of things, including frozen pipes, but whether it’s a water supply pipe or a drain pipe can help narrow down the possibilities.

“If the water pipe is leaking, it can be caused by frozen pipes, physical damage from bumping or hanging clothes, water pressure, etc.,” explains Jake Romano of John The Plumber.

“In winter we have a lot to do with frozen pipes. This can lead to small leaks or the pipes to burst. If you have pipes that are exposed to the cold and you live in an environment with freezing winters, I would recommend installing heating cables and insulation. ”

“Also, if you have an outdoor hose bib, make sure you close it for the winter. Disconnect the hose, close the valve from the inside and open the hose nozzle on the outside to empty it. Otherwise the cold can move from the outside in and freeze the pipes in your basement. ‘

“Leaking drainage pipes, on the other hand, are usually caused by broken seals. For example, if you’ve had a clog and used a plunger, chances are the pressure caused a leak. It’s not unusual. ‘

There could be other causes – and you might even have caused the leak yourself. “Most of the leaking pipes I’ve come across leak because they weren’t installed properly from the start,” said Brian Pennington, Atlas Butler plumbing director.

“Careful installation will prevent many leaks in the future. I find three common reasons for leaks. First, the plumbing was not installed with the precision required to prevent unnecessary pressure from being placed on the pipes and fittings by the structure. This may include holes that were drilled out of alignment, resulting in the pipe being pulled or tied to make the required connections. ‘

“Second, careless connections are made between pipe and fittings. Whether soldering or gluing, most of the work is done in a hurry and soldering joints can withstand a pressure test at first, but still leak years later.

“Three, there are instances where a homeowner accidentally knocks a nail or screw through a pipe while hanging a picture or replacing cabinets or paneling.”

How do you prevent a pipe from leaking?

As soon as you find a leaking pipe, take action. “You have to put an empty bucket or a pile of carpets underneath it and turn off the water all over the house or floor to keep the water from running,” says Sanitary Review professional plumber Gerald Carpenter.

Knowing what type of pipe it is can help you stop leaking pipes. “If it’s a water supply, close the valve that brings water to that pipe and drain the pipe from the bottom,” says Jake Romano. “For example, close the valve and then open the tap in the basement sink. This will drain the line so that nothing can leak.

“If there’s a leaky drain, don’t use it until it’s fixed. If it is clogged and leaking, you can suck off the contents of the pipe with a workshop vacuum cleaner. “

Note that prevention is better than cure, and you may want to add the following routine to your checklist for house maintenance this fall and planning it for other times of the year. “By regularly inspecting your pipes – maybe once or twice a year – you can run into problems before they turn into a flooded basement,” says David Steckel, building expert at Thumbtack who has over 15 years of experience as a general contractor in the housing industry.

“Spend five minutes walking around your house and around the outside where there are visible plumbing. Look under your bathroom and kitchen sinks and move all detergents and toiletries around for a clear view of the plumbing, faucets, and drain lines.

“If you see accumulated moisture, a broken pipe, or major damage, call a professional. If it’s accessible, look behind your washing machine to make sure the plumbing is in healthy condition and that there is no moisture or mold. Get out of the house and inspect all of the faucets and make sure they turn on and off cleanly. If you see water dripping from a pipe, rust or corrosion building up on a pipe, or your plumbing is damaged, it may be time to get an inspection. “

There may be other signs that alert you to leaking pipes. “Here are signs you might have a pipe leak,” said Doyle James, president of Mr Rooter Plumbing, a neighboring company. “Some of these are higher than usual water bills, mold and mildew, musty smells all over the house, inexplicable stains or damage to walls and floors, and cracks in the foundation.”

Is a leaking pipe an emergency?

Quick action is required to fix a leaking pipe. “Leaking pipes can seem like a bit of a nuisance, but they are often a sign of a more serious problem,” said Leonard Ang, CEO of iPropertyManagement.

“If you find a leaking pipe, it is best to investigate immediately. Perhaps you are looking for a quick fix or you are discovering a serious problem that, if not addressed, could cause serious damage to your home. ‘

What problems can water from a leaky pipe cause? “Water damage can cause a variety of problems, from structural damage to mold growth,” says Brian Pennington. “Some leaks start small and can get worse and worse depending on the situation. You want to stop the flow of water quickly and the best solution is to call a plumber as soon as possible. ‘

Not only is mold growth unsightly, of course, but it can also pose a health risk, and it’s critical to properly get rid of mold if you can find them in your home.

Who do you call when a pipe is leaking?

If you have leaking pipes you need a professional as it is not a plumbing problem that you should always tinker with yourself. “Call a licensed plumber and get the job right the first time,” agrees Nelson Salas, master plumber and owner of Amigo Rooter & Plumbing in Phoenix, Arizona. “Don’t try to do it yourself unless you have a lot of experience with plumbing. If you get it wrong, it can be twice as difficult to repair and cost you twice as much by the time you call a plumber to fix the problem. ‘

Jake Romano agrees that it is well worth the cost of hiring a professional. “People often forget how expensive an installation mistake can be,” he says. “I would always recommend using a licensed and insured plumber with a good reputation.”