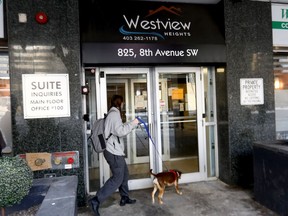 Residents have been told they can return to the Westview apartment building in Calgary that was flooded and frozen in December on Saturday, January 15, 2022. Photo by Darren Makowichuk /mail media

The majority of residents displaced from an apartment building in central Calgary due to flooding and freezing weather have been able to return home.

Ajay Nehru, a spokesman for Mayflower Ventures LP, said teams have been working hard to repair Westview Heights on 8th Avenue SW and earlier this week the building passed inspections by the City of Calgary and the local fire department and elevator inspectors. He said 80 percent of residents were able to return to their homes on Saturday.

“They passed the (inspection) at three o’clock on Thursday,” Nehru said. “I probably received the interim occupancy letter from the city at four o’clock. We have given tenants notice by approximately 5 a.m. and set a timetable for the move out, which I am delighted has been met.”

Hundreds of residents were evicted from their Westview Heights suites when pipes burst in the building in late December. The building became uninhabitable, with damage to the sprinkler and heating system and elevators. The water bursting from the pipes eventually froze in the cold holiday weather, leaving damage to the stairwells and common areas.

Nehru said the building had no hot water on Saturday but added he hopes this will be fixed by the end of the day. He said tenants didn’t have to pay rent until they had hot water.

He said most of the suites weren’t damaged by frozen water, but crews would still be working on repairing the common areas over the next few months.

Several residents of the building declined to comment on their return home on Saturday.

Mayflower Ventures originally negotiated special rates for residents to stay at a nearby hotel, but several tenants previously told Postmedia those payments had run out and they were moving from place to place each night.

Nehru previously told Postmedia residents that they would be given a loan for rent for the time they are not allowed to stay in the building.

On Saturday, he said it was learned the pipes had frozen and burst after someone broke into the Parkade and opened an area used by firefighters to access the sprinkler system.

“They left the door to the outside open,” Nehru regrets. “So now you have this pipe that is basically exposed to -30C weather. And so it is frozen. And that caused the problem.”

He said the company is making changes to the building to ensure such a problem doesn’t happen in the future.

A GoFundMe campaign in support of residents had raised $3,465. The fundraiser’s creator released an update last week saying the funds were used to house nearly 25 families.

Sign up to receive daily headlines from the Calgary Herald, a division of Postmedia Network Inc.

A welcome email is on the way. If you don’t see it, please check your junk folder.

The next issue of the Calgary Herald Headline News will be in your inbox shortly.

There was a problem signing in. Please try again

Postmedia strives to maintain a vibrant but civilized forum for discussion and encourages all readers to share their views on our articles. Comments may take up to an hour to be moderated before they appear on the site. We ask that you keep your comments relevant and respectful. We’ve turned on email notifications – you’ll now receive an email when you get a reply to your comment, there’s an update on a comment thread you follow, or when a user you follow comments follows. For more information and details on how to customize your email settings, see our Community Guidelines.