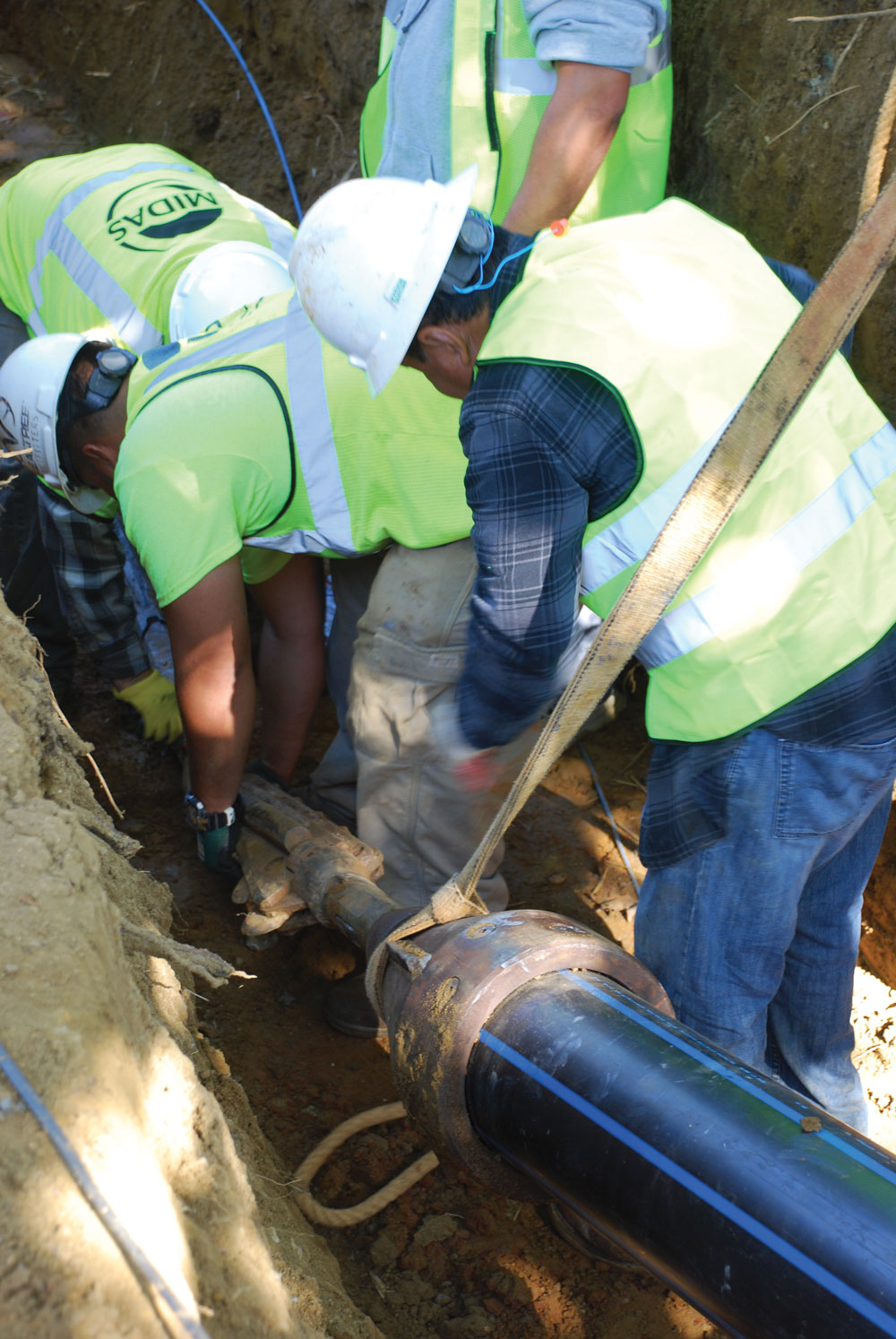 The crew members attach the burst head with blades that cut off the existing iron pipe.

By John Blondell and Christopher Overcash

Much of our country’s underground infrastructure is reaching or functioning beyond its expected lifespan. This critical network of pipes and conduits serves our most basic requirements for drinking water and sanitary sewer systems. Many municipalities are faced with the challenging task of replacing or lining up deteriorated facilities and at the same time minimizing operational disruptions for homes and businesses.

The city of Bowie, Maryland recently completed a successful pilot project replacing 830 feet of water pipe with burst pipes. Although this trenchless approach is used to replace sewer lines, this project provided a proof of concept for modernizing and replacing the city’s aging water network.

Pipe bursting is a trenchless method that has traditionally been used to replace sewer pipes for more than 30 years. More recently, however, it has been used to replace water pipes. Essentially, the process involves placing a burst pipe head in an existing pipe that is about to be ruptured. This bursting head is then pulled back through the existing pipe with a hydraulic unit. When retracting, the blades on the bursting head cut the existing pipe apart. An expansion head then follows and pushes the pipe fragments into the surrounding soil. After this expander, a new pipe is pulled into the room where the original pipe was. Due to the bursting, pipes can be enlarged by up to 3 pipe sizes, depending on the pipe depth. Typically, pipes up to 12 feet deep are either swapped from size to size or enlarged to the next larger diameter.

The process itself offers several advantages over the standard “cut-and-cover” trench method. These benefits include significantly lower design and construction costs, shorter planning and construction times, limited pavement disruption, lower risk of damage to adjacent property and nearby infrastructure, and lower environmental concerns such as impacts on streams and natural resources. The realization of these advantages depends on the respective location. For example, a pipe segment with a large number of house connections may not result in lower construction costs due to the excavation work involved in reconnecting each service connection to the new main line. In addition, the geotechnical conditions of an area can limit the applicability of the technology. This is the case in areas with dense soil conditions, such as B. various types of clay that can transmit the force of bursting to neighboring structures. This situation could also lead to possible lifting of surface floors and sidewalks. It is important to understand subsurface conditions in an area that is being considered for bursting.

The City of Bowie owns and operates a water and sanitation system that serves 7,800 residents and 100 businesses. The system, which was installed in the 1960s, includes approximately 90 miles of water distribution lines. During the 10-in. and larger pipes are concrete-lined cast iron, most of the pipes being 6 or 8 inches tall. Unlined cast iron pipe with a diameter that has had significant corrosion problems. The most common corrosion problem is tuberculosis, in which small iron oxide piles (tubercles) form in the pipelines. The accumulation of tuberculosis over the past 50 years has reduced the hydraulic capacity of the pipes, and when high flows occur, suspended iron oxides discolor the water.

After exploring various strategies for replacing their water pipes, Bowie’s public works department initiated a prototype pipe bursting project in one of the very low flow neighborhoods. This particular section of 6-in. Main line is approximately 830 feet long and serves 23 homes that are not served by any other aqueduct. The aqueduct extends under trees, asphalt roads, paved driveways, sewage and gas systems and a stream.

The city wanted to avoid unnecessary interference with the daily activities of the residents who lived along the section of the aqueduct. The pipe bursting was optimal as it required limited excavation, reducing costs, shortening the construction plan and minimizing the impact on owners.

The design effort could also be optimized. Since pipe bursting is a means of rehabilitating existing pipes in the same location, the engineering drawings could be made without the need for a full topographical survey that is required for engineering design drawings for standard pipes. The design used the existing GIS mapping of the city as the basis for the construction plans to indicate the location of the bursting efforts as well as other accompanying details. A particular challenge for the design team was the lack of a profile drawing for the existing water pipe. The profile would have indicated the main water depth as well as the configuration of the aqueduct under the existing stream. Because of this, the design team ran several test pits at the river crossing to check for the lack of pipe fittings or concrete jackets that might prevent the burst head and tie rods from passing through this area.

The contractor set up a water bypass and dug entry and exit pits for the bursting facility approximately 500 feet apart. The new 8-inch. The pipe was pulled past the expander head within 14 inches of a nearby gas line and under the stream with no environmental impact. After testing and disinfecting the new water pipe, eight water supplies were then restored.

The success of this project provided a proof of concept for replacing the city’s aging water distribution system while minimizing disruption to residents’ daily activities. In Bowie, this pipe burst project proved successful with numerous benefits including:

As with many approaches to upgrading or replacing underground infrastructure, pipe bursting may not be appropriate in all locations and must be evaluated against other methods for constructability, efficiency, and cost effectiveness. For the City of Bowie and many other communities, it’s another tool in the toolbox to help manage their aging assets and provide the best possible service to their customers.