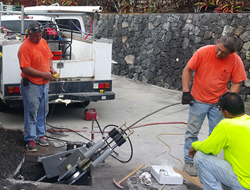 TRIC angle one in

TRIC is great, you put the pulley base at an angle to avoid underground utilities and still pull like a champ.

In September 2015, the burst pipe manufacturer TRIC Tools sold its X20 system to Calvin’s Plumbing exclusively for the replacement of water pipes. TRIC field trainer Jose Moreno traveled to Kailua-Kona on the large island of Hawaii to train Calvins on her first project on bursting water pipes. The homeowner’s HDPE (high density polyethylene) water pipe, 1-1 / 4 “in diameter, was leaking under the driveway, so Calvin decided to replace the entire 65 feet by bursting the pipes.

The standard TRIC water line kit contains a splitter head that replaces the ¾ ”and 1” service lines made of copper and plastic. When Jose arrived on site, he and his client discovered that the split head provided was a little too small for the job. After talking to John Rafferty, TRIC’s senior trainer, Jose Calvin instructed a local machine shop to drill the end of the 1-inch water pipe split head, which was originally intended for use with 3/8-inch cables so that it can slip The 5/8 “cable burst in front of the 2” standard TRIC head tube. Thus, the 1 “split head acted as a pilot drill that first entered the 1-1 / 4” pipe and opened it wide enough for the TRIC to allow 2 “pipe. Head to follow after. The 2 “burst head was fitted with a 2” to 1-1 / 4 “HDPE pipe reducer which allowed Jose and Calvin to proceed with no problems replacing the pipeline.” The concern on site was whether the 3/8 “cable for the 1” head would break and if there would be enough annular space around the new pipe as the old pipe was split during the pipe change, “commented Mr. Moreno. Often, when there is not enough space around the new pipe, when the ground moves through the ground, the cable and pipe are put under additional stress. Since the 3/8 “cable only had a breaking strength of 7 tons, this was a Problem with this particular magnification. The 5/8 inch cable used had a breaking strength of 23 tons, which was a good safety factor for the 20 ton hydraulic puller. The other concern at work was that there was an electrical wiring near the water pipe. Jose instructed Calvin to set the TRIC puller at an angle to avoid touching that line. “Our technology is great; you can put the bottom and plate of the pulley at an angle to avoid other utility lines and you still pull like a champ,” said Moreno.

TRIC invented and patented the first Lateral Pipe Bursting System while obtaining national approval for HDPE pipes for its use. This opened the market for the trenchless exchange of house sewers in America.

For more information on trenchless pipe rupture equipment, or the trenchless industry in general, call 888-883-8742 or visit the TRIC website at http://www.trictrenchless.com to see how these questions can be answered for you . Get your trenchless sewer and water exchange service sideways on the right foot.