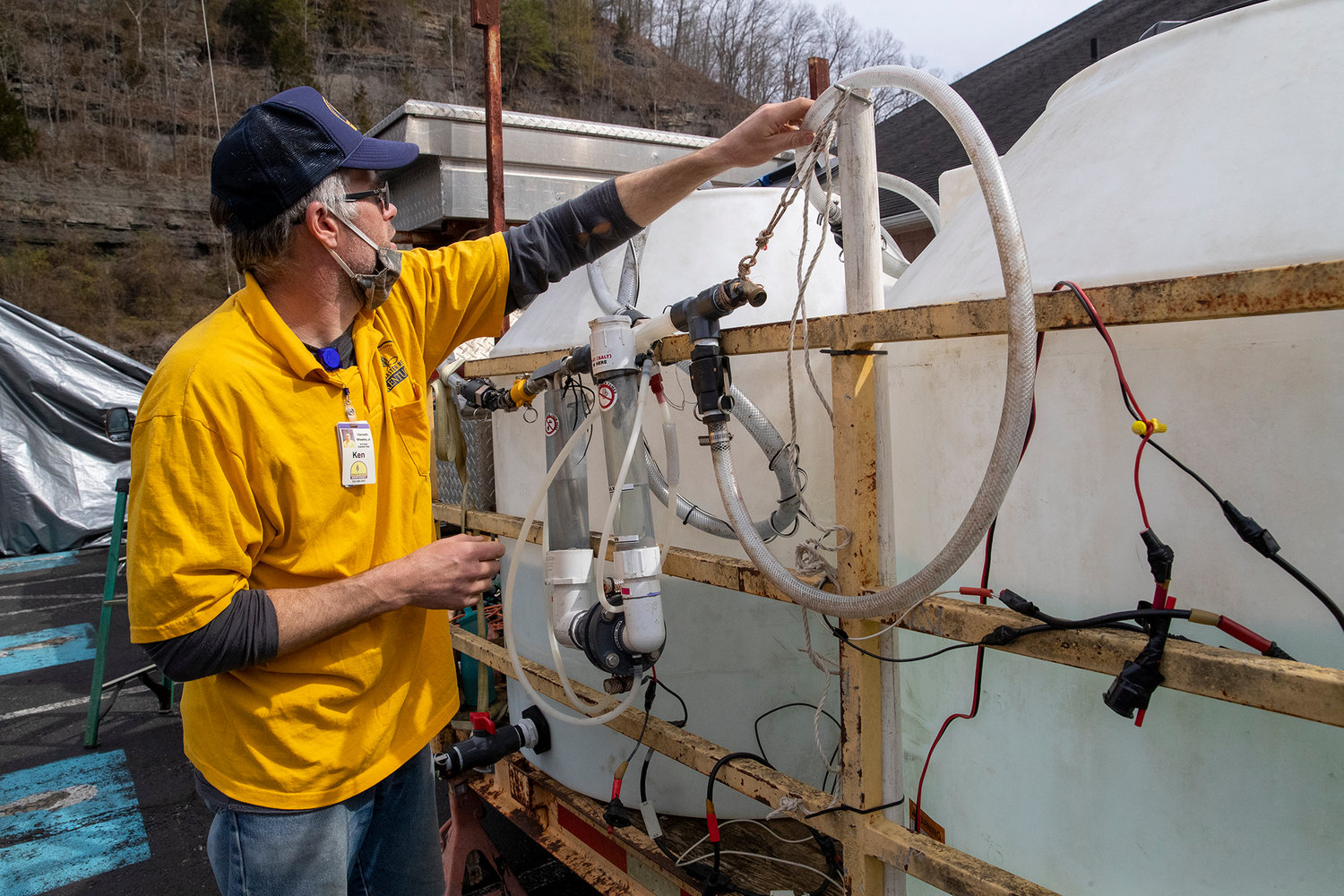 JACKSON, Ky. (KT) – Most people in the US take clean water for granted. Turn on the faucet and it will come out. Ready to drink, cook and clean.

This was no longer a given in parts of eastern Kentucky last week due to widespread flooding that turned off water pumps or forced the shutdown of lines to repair broken lines.

Kentucky Baptist Disaster Relief stood ready to support those needs with the maiden voyage of a water purification system that this week purified thousands of gallons of water and provided hundreds of clean water.

They spent 600 to 700 gallons on individuals and supplied the Disaster Relief kitchen trailer with clean water for cooking and cleaning. It was a successful first mission for the water purification system.

“We take it for granted,” said Ken Wheatley, Blue Hat director of water treatment systems, of clean water. “We like to give you clean and safe water.”

The water treatment system consists of three 300-gallon tanks, Wheatley said, which takes about 30 minutes to fill. The Jackson municipal water system kept a pipe open to provide water, but it needed cleaning. A boiling water order is still issued.

“Just before we got there on Sunday, Karen Smith (the leader of White Hat) said they had turned all the water in town off for repairs,” he said. “It was all unsafe. FEMA said you have to keep that one section on because they need to have that water in order to purify. “

Ron Crow, director of Kentucky Baptist Disaster Relief, said water filtration must be there while the area is under boiling water regulations.

“It’s an amazing system from what I’ve seen,” he said. “I don’t know how we could have functioned in our feeding operations without them. We are blessed to have it, especially one that has produced as much as this one. “

Wheatley runs the water through the filtration system, which includes the creation of a chlorine gas that is introduced into the water. They also run it through an activated carbon filter to capture anything that might have entered the urban water system. “That’s why we’re here because the water has been compromised,” he said.

A total of 900 gallons were cleaned on the first day she arrived on Tuesday, Wheatley said. The cleaning system includes salt water and a 12 volt car battery that creates the gaseous chlorine, which is 5 to 10 times more powerful than what is used for swimming pools.

They test the water regularly, similar to swimming pools, until it settles to two ppm (parts per million). It starts at 5ppm, which kills any bacteria that could cause disease. It’s safe for use at 2ppm, he said.

They have given individuals water through 2.2 gallon silver mylar bags and also filled sanitized plastic bottles to distribute. The water is also fed into a kitchen that has already delivered more than 6,000 meals.

Wheatley said the water filtration system worked well, but there is always room for improvement. He said he would give the grade “B or B-Plus” for the week so far.

“We’re doing everything we can,” he said. “The first time is always a learning experience. It’s just little things. We have everything we need and have been trained and trained for it. (But) like the water supply of the kitchen trailer and a washing station for washing utensils, we use a small booster pump with a power to give them some water pressure. Next time I’ll have a bigger reserve pump. “

Wheatley understands water treatment so well that one of the relief workers called him “Aquaman,” but honestly, he did many other jobs while at Kentucky Baptist Disaster Relief. Clean water is a passion for him, perhaps because of a mission trip to Ghana in 2011 when he helped a team set up a water purification system for a village there.

It is not uncommon for third world countries to struggle with clean water and that helping this village is something that has remained for him. He said before the system was installed, they drank water from puddles of mud with many diseases.

“We taught them how to use it and made sure they understood how it works,” he said. “We hired someone from this village. It was their job to take over the property and maintain it every day. “

Crow said stories like Wheatley’s are tied to the passion that comes from working with Disaster Relief.

“The nice thing is that they usually have an interest in something that comes from somewhere or an experience in their life. When they realize that they can use this talent to train for a ministry like this, they start a fire that cannot be put out. That creates the passion. “

Wheatley says that providing clean water to everyone can open the door to a gospel message. “That is the main reason to do all of this, to spread the gospel and to help people in need. The water and feeding open the door to the community to meet people where they are. It could be people who have never entered a church door. God takes you where you are needed. “

Wheatley, who lives in Switzer, Kentucky, near the Franklin-Scott County line, said he will stay in Jackson as long as clean water is needed.

“This is the first time we’ve had it on the field and we’re excited about it,” he said. “We trained and built it over 10 years ago I think and we’re finally getting it out. I hate it when we have to use it because it means people are in great need. But that’s what it’s there for. “

He said people across the Jackson area had come to thank them for the water and food. “People are very, very grateful and we are happy to be able to help them.”

Watch: Pipe burst on Albertina Sisulu is not a quick fix