Real home: this homeowner transformed her childhood home bathroom for £5,000 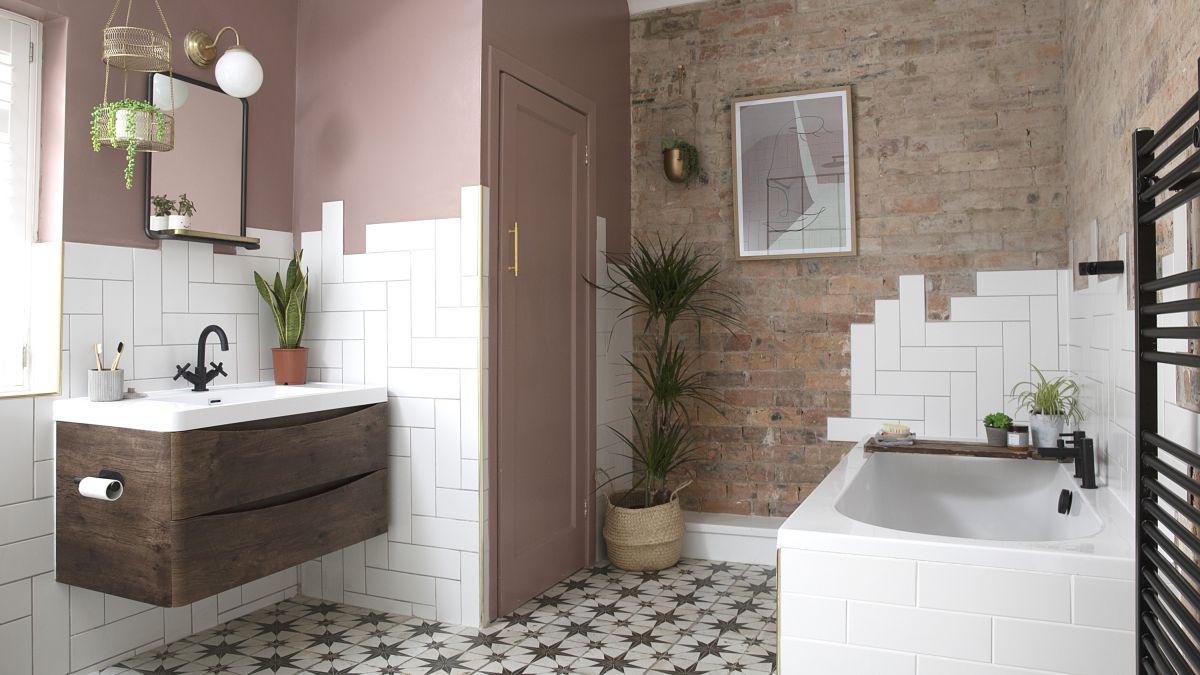 The bathroom may be the smallest room in your home, but renovating it isn’t any easier than the others. In fact, making decisions is made harder by the fact that most of what you choose is pretty permanent, from sanitary ware to storage to tiles.

Heather and Darren Russell found just that when they bought Heather’s parents’ house in 2019. The familiar bathroom was dated, but she hoped it could become a quiet retreat while they renovated the rest of the house. Unfortunately, after trusting a family friend to renovate it, they had to do it again due to a gap in the vanity, tile falling off, and uneven grout.

They found Steve and Adrian from Durham Tiling to come to their rescue. “They were great and carefully removed the old tiles without damaging the fixtures,” says Heather. The room’s generous dimensions allowed the couple to fit into a large bathtub, walk-in shower, and vanity that show off their stunning floor tiles.

Read on to find out how they did it. Are you ready to start planning your own space? Check out our bathroom renovation ideas to get started.

Time for a change

The owner Heather Russell, a project manager, lives here with partner Darren Young, a civil servant, and children Joanna, 10 and James, 3
The property A three bedroom duplex from the 1930s in Sunderland
Project costs € 5,480

“The old bathroom was a good size at eight feet by four feet,” says Heather. “It had large, beige-colored stone-look tiles halfway up with fuchsia-colored walls above, chrome fittings and a shiny white washstand with a mirrored wall cabinet. Since I lived here between the ages of 10 and 18, I felt like I should speak to my parents and explain to them that we wanted to make changes to make it work better for our family. They were really excited to see what we did. ‘

“One of the hardest things was getting a shower tray between the two walls. The cost of customization would be ridiculous so we added a bit of the wall at the end of the shower. Had we known we were going to do such construction, we would have probably bought a concealed shower, but we already had the wall-mounted shower set.

“The bathroom was first fitted with concrete-style LVT flooring, but when the brickwork was exposed the deep gray felt too harsh. The second time we opted for a patterned porcelain stoneware tile, which we very much prefer. “

“I wanted a hotel-style bathroom rather than something traditional, so the look was inspired by Pinterest, Instagram, and places we stayed on vacation. Since we were already planning an industrial-style kitchen extension, it made sense to create a similar look in the bathroom, so we decided on black fittings.

“Originally I tended to go with a dark green paint job, but when we got the walls re-plastered I liked the look, so we went with Farrow & Ball’s Sulking Room Pink, which has that plastered look. We are fortunate to have a large closet to house the boiler, but if it is replaced we will likely create clever storage with boxes and shelves for towels and toiletries. “

“The exposed brick was not planned – it was more of a happy coincidence. Since the plaster wasn’t done right the first time, everything went away and the whole wall had to be dismantled except for bricks. The day before the rebuilding, I called the plasterer and said I shouldn’t bother as I really like the industrial look.

“We got an acidic brick cleaner and scrubbed off all the cement layers. Now all we have to do is finish it off with a sealant. When you’re in the bathtub, it’s nice to see a candle flicker against the natural bricks and plants – it’s like you’re outside. “

“Among other things, I opted for a wall-mounted vanity unit because it is easier to clean underneath. A floor-standing cabinet with more drawers would have looked a bit too box-shaped – it feels less clunky. Also, I love the floor tiles so much that I wanted to see as much of them as possible.

“I was probably too careful with the wall light to make sure it was safe for a bathroom. This Ikea was really reasonable, it had the correct IP rating and the gold reflects the tile trim around the window. An industrial style mirror with accessory shelf was another must-have, and this one was a bargain at half the price for £ 20.

“At first the tiles were laid in a herringbone pattern, but it would have been too expensive to lay them the same way. I wanted something else too, so I checked out Instagram to see where I got the idea for the unfinished look with no trimmings.

“The tiles aren’t the most exciting, but the way they are laid makes a huge difference. Our brilliant tiler Steve made a new wooden frame to replace the damaged tub panel that he covered with tiles. He also advised against using a darker grout, knowing which shade would work better. We really appreciated his contribution as we didn’t want to make a wrong decision and have to repeat it a third time! ‘