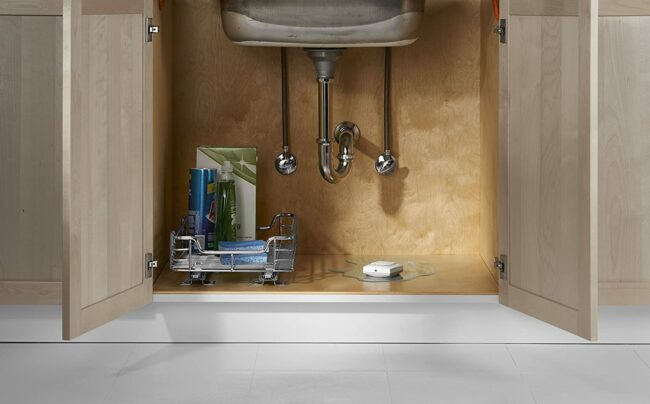 Water leaks can be expensive. Not only will they elevate your water bill, but the damage that results can also cause thousands of dollars in damage to your home. Water leaks are also incredibly common, with over 2.5 million homeowners experiencing one every year. Of those, 40 percent of homeowners report dealing with water damage at some point, making it six times more common than house fire damage. To avoid a similar fate, it’s wise to identify water leaks as soon as possible before they turn into a financially devastating problem. 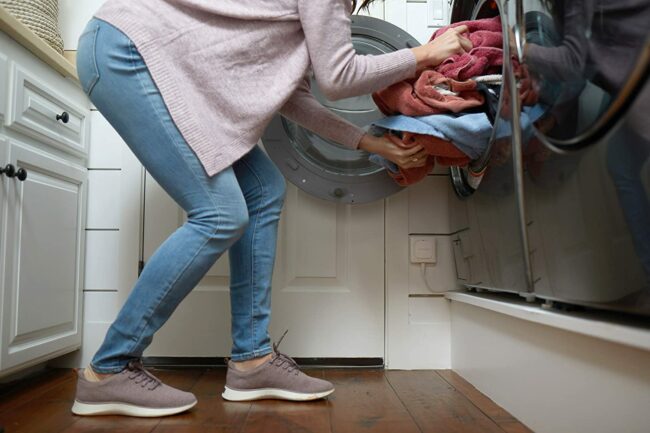 What to Consider When Choosing the Best Water Leak Detector

Water leak detectors offer a variety of features that influence their functionality. Understanding the differences among these features is important in helping you determine the best water leak detector for your home.

Water leak detectors should be located next to water-supplied appliances and plumbing fixtures like toilets, sinks, refrigerators, hot water heaters, and washing machines. They can also be placed in basements, attics, crawl spaces, and any other areas prone to leaks from rain and melted snow or ice.

While any size of water leak detector is useful for larger open spaces, like basements and garages, a smaller detector might be necessary to fit in more cramped and vulnerable places, like behind fridges and toilets. However, many plug-in water leak detectors have sensor cables that are several feet long, allowing them to detect leaks a significant distance from where the base of the detector is located.

Most water leak detectors have built-in alarms that emit a loud beep or ring when a leak is detected. Also called “local” alerting, these built-in alarms often have the same or greater decibel rating (85+ dB) as smoke and fire alarms (75+ dB) and will stay active for a period of several hours to a few days until they are manually silenced. This makes it possible to hear the built-in alarms throughout the house, so you don’t have to worry about a leak going unnoticed. Some water leak detectors also have audible alarms that indicate low battery life.

Along with, or in place of, local alerting, some water leak detectors are capable of integrating with smart-home technologies like Amazon Alexa, IFTTT, and other third-party services. This partnership allows you to receive alerts and notifications from your smartphone and other smart hub devices, such as an Amazon Echo. In contrast to local alerting, these smart leak detectors are capable of sending notifications to your phone, even when you’re not at home, allowing you to quickly detect leaks regardless of your location. Some smart leak detectors use your home’s Wi-Fi network connection to transmit a signal, while others use a dedicated service for a monthly fee.

Although uncommon, some water leak detectors include an automatic water shutoff system that turns off the supply as soon as it detects a leak. These “inline” units are installed directly onto a water supply plumbing line and continually monitor a home’s water usage to detect leaks. Once a leak is found, they function much like a manual water shutoff valve by closing off the home’s water supply. Although commonly tied into a home’s main water line, these detectors can also be placed on a single water line, such as the hot water heater supply. However, when installed onto the main water supply line, they offer whole-house protection from leaks instead of only locally isolated detection.

Leak detectors that incorporate automatic shutoff are typically expensive—usually around several hundred dollars—but could potentially prevent thousands of dollars in water damage, making the extra expense worthwhile. These units are especially valuable for vacation homes and rental properties where the owner frequently isn’t on-site and able to personally monitor for leaks.

Some water leak detectors can monitor temperature and humidity along with leaks. This functionality can act as an effective preventive measure against future problems, as freezing temperatures sometimes lead to frozen and broken pipes, and humidity can contribute to mold and mildew growth. Most leak detectors with additional sensors also feature smart technology, allowing you to constantly monitor these conditions from your smartphone and other devices.

Even after learning the various features that different water leak detectors can offer, it can be hard to choose the right one for you from the plethora of available options. To begin to dispel the confusion, the top picks feature a selection of some of the best water leak detectors on the market in several different categories for quickly catching leaks and floods before disaster strikes. 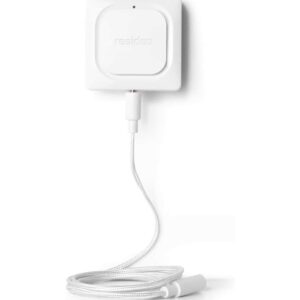 This water leak detector from Honeywell marries functionality and simplicity by incorporating several detection and monitoring functions into an easy-to-use device. The detector includes a 4-foot-long sensor cable for identifying leaks in both tight and wide-open spaces and is expandable up to another 500 feet with additional cables. It’s battery powered, so it’s useful practically anywhere while offering a three-year battery life.

Along with a loud alarm for local alerting, this leak detector can be used with Amazon Alexa and Google Home Assistant to receive alerts and notifications. It can also integrate with a home’s Wi-Fi network and features an app to send alerts directly to a smartphone. The detector is also equipped with temperature and humidity sensors, both of which can also be monitored via the app or connected smart devices. 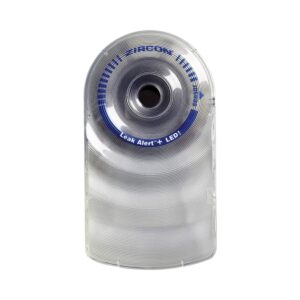 Zircon offers not only one of the most affordable water leak detectors on the market but also one of the most unique. Instead of relying exclusively on an audible siren, this detector also features a flashing LED light that can complement the loud local alerting and will stay on for up to 72 hours or until the siren is manually silenced. The compact and battery-powered detector features a specially designed housing that allows it to float when exposed to flooding so it won’t be fully submerged and destroyed if it’s subjected to a flood in a garage or basement.

Zircon offers a similar unit without the flashing LEDs at an even lower price point. It also sells models with upgraded features like Wi-Fi integration for email alerts and water sensing cables for expanding the area in which it detects leaks. 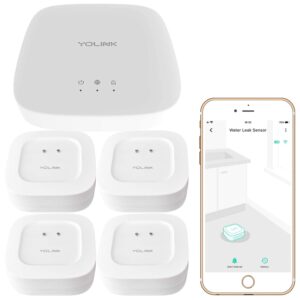 Looking for a leak detection solution that’s capable of integrating with smart devices? This water leak detector from YoLink can send leak alerts in the form of smartphone banner notifications, SMS text messages, and emails, and can even transmit alerts by integrating with Amazon Alexa and IFTTT-compatible smart devices. Once the detector is integrated with a smart device, the paired app sets up monitoring routines and tracks history logs to ensure leaks are discovered and noted as soon as possible. Boasting the longest wireless range in the smart-home industry, the base can connect to individual detectors from up to 1,000 feet in the open air outdoors and up to 328 feet indoors.

As opposed to other smart-home leak detectors, this model isn’t dependent on a home’s Wi-Fi network but instead uses special radio frequencies to transmit its signals without taking up the network’s bandwidth. Although this unit doesn’t feature a built-in siren alarm, a compatible siren alarm is available for separate purchase. YoLink also offers other compatible accessories like an automatic shutoff valve for sinks. 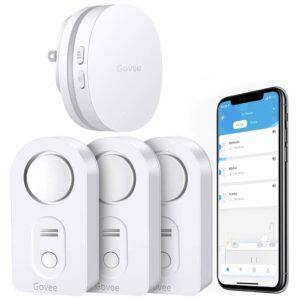 This water leak detector from Govee detects leaks and sends a notification in two ways: directly to a smartphone via a home’s Wi-Fi network and through a local alerting siren alarm. Once connected to a home’s Wi-Fi gateway, the detector sends alerts via SMS and email at all times. As a safety backup, a built-in, 100-decibel siren alarm will function even if the Wi-Fi connection is temporarily unavailable. This leak detector also boasts a high waterproof rating, so it won’t be damaged or destroyed during extended periods of use in high-moisture areas or even in the event of full water submersion.

To gain the most benefit from a water leak detector, first identify the sources of potential leaks. If you’re primarily concerned about plumbing fixtures, a small and compact leak detector might be required to access tight and confined spaces under sinks and next to toilets, washing machines, and dishwashers. On the other hand, if you’re concerned about flooding and need to cover a large surface area of floor space, consider a leak detector with a long and extendable sensor cable.

If your detector relies on a built-in siren for alerts, ensure that you can hear it throughout the house, regardless of where the detector is located. While the sirens are usually loud enough to hear from most rooms in a home, they might not be sufficiently loud if they’re in a garage (especially a detached one) or an insulated basement. If you can’t hear the alarm from that location, consider upgrading to a detector with a louder siren or one that can send alerts directly to a smartphone. Here are a few more tips for using a water leak detector.

Do you still have some lingering questions about water leak detectors? Consider the answers to the following frequently asked questions.

Q. Where do you put a water leak detector?

You can put a water leak detector next to toilets, sinks, dishwashers, washing machines, and hot water heaters as well as in garages, basements, or anywhere else prone to flooding.

Q. How do I find out where my water is leaking from?

If your water leak detector features a local alerting sensor and siren, the leak will be coming from the spot in which your detector is located and the siren was triggered. If you have a WiFi-enabled or smart leak detector, your smartphone and other connected devices will identify the location of the leak.

Q. How do you install a water leak detector system?

Set a water leak detector directly on the ground (which doesn’t require any actual installation), or install it on the wall with double-sided tape, adhesive, or a similar mounting material.

The average lifespan of a water leak detector will vary between manufacturers, but any given detector is likely to remain functional for several years. However, this lifespan could be reduced by total water submersion if the detector has a relatively low waterproof rating. A leak detector’s battery life can last anywhere from one to 10 years.