The Future of Kitchen Design Is Hands-Free and Smartphone-Activated 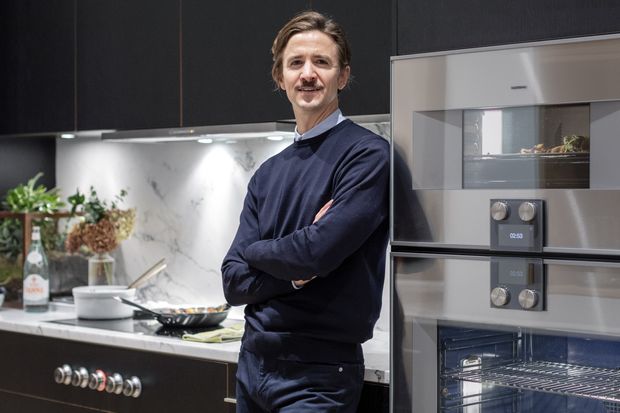 Douglas Gilman put a new designer kitchen in his Manhattan apartment last year with entertaining in mind. He placed the sleek marble-accented Dada kitchen, from Italy’s Molteni&C, at the center of the airy 2,800-square-foot home that he created from combining two adjacent units in a former West Village printing house. He figured it would give him easier access to his guests.

But the arrival of Covid-19 restrictions has meant much more cooking, and next to no entertaining, and it’s his high-tech German appliances that have come to the rescue, including an induction cooktop that can sense where he places a pan, and a speed oven that combines convection and microwave technology.

“My ovens are almost more advanced than my computer,” says the 39-year-old financial-services professional of his $30,000 set of appliances from Gaggenau, Miele, and the U.S. brand Sub-Zero.

Eating may still be analog, but kitchens have taken up residence in the digital age, as designers and appliance makers increasingly rely on a host of technological innovations to update the traditional tasks of cooking, storing and cleaning up. Kitchen-appliance categories haven’t changed much since the 1970s, when microwave ovens began appearing on ordinary countertops. But cameras, sensors, artificial intelligence and newfangled materials are now turning those appliances into ultrasophisticated hardware, while smart functions and connectivity are recasting the Cloud as the latest kitchen accessory.

Phoenix Homeowner Dean Heckler relies on sensors in his Miele coffee maker to measure the cup size of his latte, and uses Apps to adjust the lights in his kitchen, monitor solar-power production for his house and adjust his living-room thermostat. VIDEO: Steve Craft for The Wall Street Journal

Buyers of Miele’s new G7000 series dishwashers never have to worry about running out of detergent. When the machine runs low, a sensor prompts their smartphones to reorder the brand’s trademark detergent disk from the company’s online shop. 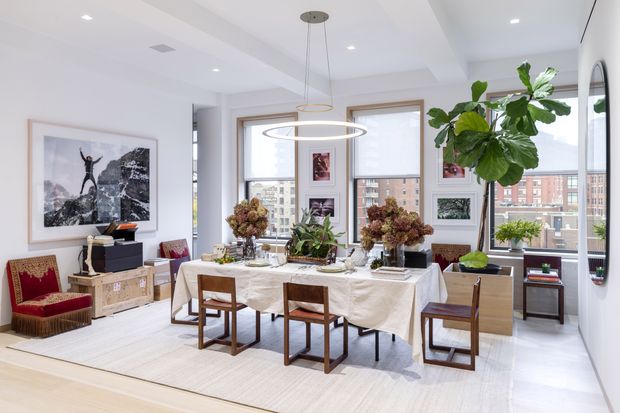 Elsewhere in the kitchen, cameras in refrigerators can be called up on smartphones, allowing you to look into your fridge from the grocery aisle to see what you need to buy. For European homeowners, Bosch’s new Cloud-accessing system has a fridge camera to suggest recipes based on what you already have on-hand.

As the pandemic draws new focus to the kitchen, with families forsaking frequent dinners out for daily home-cooked meals, players in the industry are noticing an uptake in sales—accompanied by a greater interest in high-tech options. Even induction stovetops, which can be a hard sell for gas-loving Americans, have seen demand rise by 35% in the U.S.

Appliance sales declined in the early months of the pandemic, but now “U.S. demand has really come back strong,” says

the executive director of sales and marketing for Miele. “Consumers can’t spend money on other things, so they have started renovating their kitchens.” 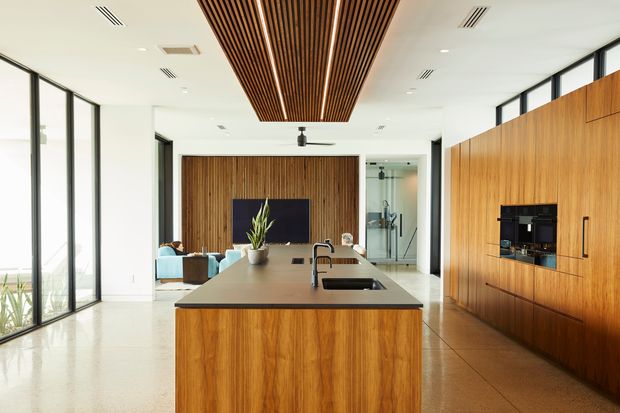 The Hecklers of Phoenix have a kitchen that features a sensor-equipped Miele coffee maker, lights controlled from a smartphone app and a Dekton composite countertop that resists heat, light and scratches. A nearby TV has the option of an app-created camouflage screen when not in use.

Has the pandemic made you rethink your kitchen’s design? Let us know in the comments below.

Covid-19 is changing homeowners’ basic expectations for the kitchen, according to a new survey compiled by the National Kitchen and Bath Association. Companies are seeing soaring requests for items that help keep the cooking area more sanitized, such as touchless faucets and antimicrobial surfaces.

Kohler, the Wisconsin-based plumbing company that specializes in luxury finishes, says a majority of homeowners recently sampled are starting to regard the touchless faucets as must-haves. Kohler now combines voice automation with their touchless feature, allowing you to command your faucet to pour exact amounts of water. Homeowners can go so far as to customize voice orders by recipe. Daniel Markham, a Utah-based influencer who has Kohler faucets in his new home, shouts out “mac and cheese” for just the right amount of water for the recipe his family of five uses.

Benoît Favier, managing director of La Cornue, the French oven and stove maker based outside Paris known for its customizable luxury ranges, says he expects a 15% to 20% rise in sales in 2020. Mr. Favier says customers are increasingly interested in copper detailing, which is thought to have antimicrobial properties.

Earlier this year, at the height of the pandemic, La Cornue introduced the Château Suprême, an Art Deco-inspired upgrade on its traditional design. The unit allows homeowners to mix and match induction and gas burners with a teppanyaki plate and a walnut cutting board. Prices run as high as $165,000.

Thermador, the California-based luxury appliance brand, offers an extra-low simmering feature that, the company says, lets you melt chocolate on a paper plate. Thermador users can hook up all its appliances categories to the same app, which will alert you that the fridge door is open, let your preheat your oven, or adjust the temperature of your wine cabinet to accommodate an unusual varietal. On its high-tech to-do list: finding ways to digitalize its luxury gas stoves.

Designer-kitchen makers are also going high-tech. This year, Italy’s Boffi introduced its high-performance ceramic-like material, called MDI, which can be used for a range of kitchen surfaces, including countertops and filler space around appliances. Nonporous, as well as crack- and stain-resistant, it is much easier to clean, and therefore more hygienic. A high-tech alternative to other materials, such as stone and stainless steel, it has a grain-like finish that is soft to the touch.

A Phoenix Home That Lets Apps Do the Work

High-tech automation marks the new home of Phoenix couple Dean and Angela Heckler, who use apps to control everything from indoor thermostats to outdoor irrigation systems. The back entrance of the 4,000-square-foot, three-bedroom home.

High-tech automation marks the new home of Phoenix couple Dean and Angela Heckler, who use apps to control everything from indoor thermostats to outdoor irrigation systems. The back entrance of the 4,000-square-foot, three-bedroom home. This gut-renovated 1890s townhouse in Boston’s Back Bay is wired and ready for a new home-automation system. The new kitchen includes a 48-inch Wolf range with an infrared griddle. Agent: Michael Harper, MGS Group Real Estate 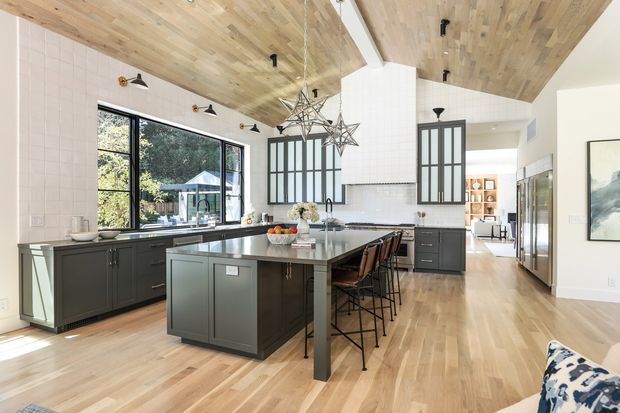 A newly built Silicon Valley mansion, prewired for a surveillance system, with motion detectors and door sensors throughout. The kitchen has a 60-inch range with six burners. Agent: Judy Citron, Compass

The rise in outdoor cooking as safer for entertaining than closed spaces has companies investing in research into materials for planned outdoor-kitchen lines, say a handful of executives.

In a new smart home in Phoenix, Dean Heckler, a 47-year-old industrial designer, and his wife, Angela Heckler, a 35-year-old fundraising director and singer-songwriter, put their new high-tech kitchen, finished in early 2020, at the center of a long, glass-enclosed, open-plan living space.

The island—covered in Dekton, a high-tech mineral composite with a large quartz content—is outfitted with an induction stove that senses pan size and a downdraft vent system. All blend in so seamlessly that the unit looks like a dining table.

“You don’t notice the kitchen unless you’re using it,” says Cavin Costello, the couple’s architect. “But it still has all the firepower.”

The Hecklers spent about $125,000 on the kitchen, including nearly $4,000 on a built-in Miele coffee maker, with sensors that detect the height of the cup being filled. They planned their project with automation in mind, and everything from their irrigation system to their house locks and lights can be controlled by Apple HomeKit and Siri.

A high-tech standout: their Steinway piano, which can record Mrs. Heckler’s performances to an app, where her compositions can then be edited. It can also play on its own on command. “You can treat the piano like a HomePod,” says Mr. Heckler.

For a Wisconsin couple, who wanted the kitchen in their Maui vacation home to be modern but not complicated, an innovative element is used to accent traditional touches. The couple, working with Chicago designer Mick De Giulio, spent about $380,000 on the kitchen, which includes expensive wood detailing, mixing wenge and smoked-Eucalyptus veneers with solid Monkey Pod, a locally grown hardwood.

Mr. De Giulio designed the $12,000 LED light fixture to complement the various finishes. LED lighting was once too harsh, he says, but the latest generation “gives off a really nice light that is complementary to wood grains.”

The humble toaster got an upgrade last year from Revolution Cooking, a Massachusetts-based company whose touch-screen smart toaster uses a quick-heating alloy to flash-toast and evenly brown while holding in moisture.

Europeans in select markets can now buy a new countertop Bosch cooking appliance called the Cookit that uses sensors to perfect a range of cooking functions, from evenly reheating leftovers to searing a steak.

Miele has recently introduced a whole new kind of oven, called the Dialog Oven, which uses electromagnetic waves to cook closely placed foods with differing energy levels. The company likes to show off the technology by cooking a fish in a block of ice. The oven can cook a roast in an hour, while a nearby pan of vegetables stays al dente.

Up-to-date kitchen appliances are key in the latest home-sales market, says Michael Harper, an agent with Boston’s of MGS Group Real Estate. He says a suite of new Sub-Zero Wolf kitchen appliances is a star selling point for a single-family Back Bay townhouse that dates to the 1890s.

The four-bedroom, seven-bathroom home, which just underwent a gut renovation, has an asking price of $9.995 million. “Luxury buyers want what they want, and they want it now,” he says, of the turnkey kitchen, which has an island covered in Italian Paonazzo marble, with a honed finish meant to resist stains.

While the pandemic is boosting current sales, kitchen companies are looking to the future. Bosch is researching induction surfaces that may one day do away with stovetops entirely, letting you turn select surfaces into potential burners. Agrilution, a Miele subsidiary, is now marketing small vertical farm units, called Plantcubes, for growing herbs and greens.

Robotic devices already have a place in American kitchens thanks to

the Massachusetts company that introduced the robotic vacuum cleaner in 2002, and, a decade later, the robotic mop. (In Phoenix, the Hecklers, use the company’s latest vacuum model, the self-emptying Roomba s9 to help keep dog hair to a minimum.)

iRobot’s CEO, foresees kitchen robots will next be used to take care of other menial tasks, such as loading and unloading dishwashers.

Howie Choset, a professor of Robotics at Pittsburgh’s Carnegie Mellon University, has his doubts about humanoid robots as servants-of-the-future. But he does see a growing role for machine-learning technology to help out with cooking technique, citing a potential future smartphone app.

Prof. Choset, part of a team doing kitchen-related robotics research in conjunction with the Culinary Institute of America, believes the app may be only a year or two away.

He sees cooks perfecting their slicing, dicing, braising and basting, while the camera on their smartphone tracks their technique, and voice-equipped technology shouts out pointers—comparing their actions with those of an expert chef.

Back in his own kitchen, Prof. Choset says he is still working on the basics. “I just learned to cook oatmeal,” he says.