‘Theatrical’ Queen Anne home on Healy Block in Minneapolis on market for $625,000 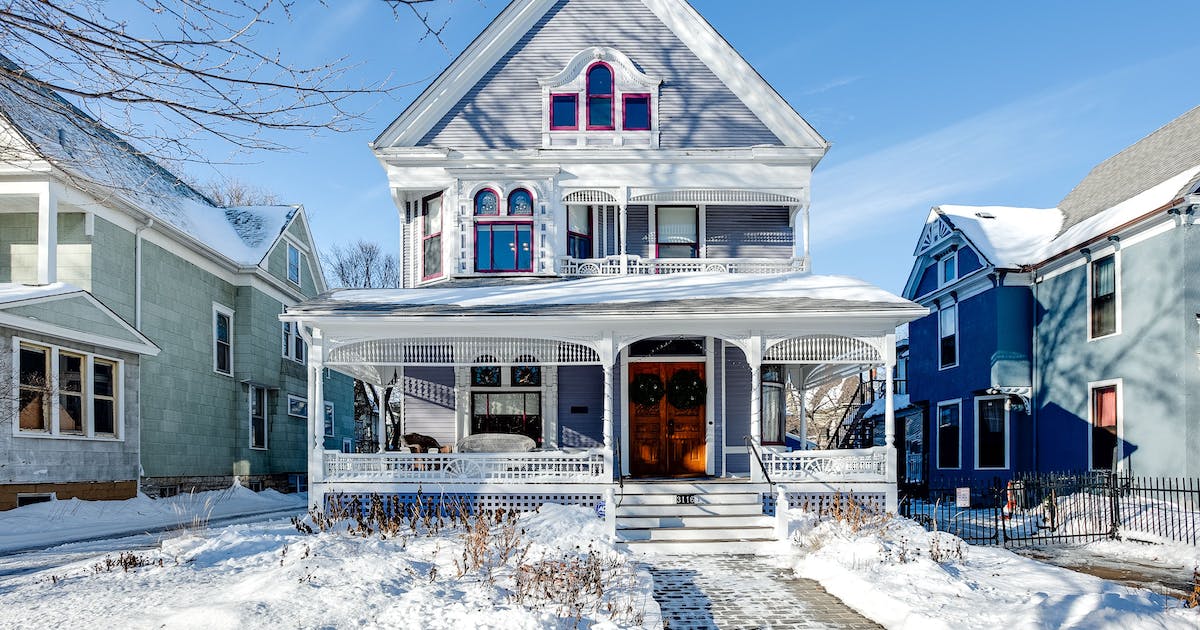 His notable works include the nationally designated Healy Block Historic District, 14 Queen Anne homes in south Minneapolis that share an alley on the 3100 block of 2nd and 3rd Avenues. The houses, visible from I-35W near the 31st Street exit, have become a familiar sight on the daily commute.

When one of these 3rd Avenue homes was listed a few years ago, an unexpected buyer showed up – Healy’s great-grandson, John Cunningham.

Originally, John and his wife Sally Cunningham had not planned to make an offer. But when someone from the Healy Project, a non-profit organization dedicated to preserving Healy homes, reached out to John, an architect, they decided to at least take a look at the Queen Anne Victorian.

Trademarks had to be restored.

“We decided to restore it and save it from someone coming in and possibly breaking it down into an apartment building or something,” said John, whose mother grew up in one of the homes in the Historic District.

In 2012 the couple bought the place thinking they would modernize it and sell it within two years.

“Here I’m a contemporary architect and I do that. But you look at the stained glass and how it hits the light and then all the details in the woodwork,” John said. “All facades are different. All towers are different. He was very resourceful in his decisions. It’s infinitely interesting.”

Built in 1891, the home is known as the Bennett-McBride home after lumberjack Henry H. Bennett, who was the original owner, and the McBride family, the third homeowners whose family members lived there for more than 60 years. The family was recognized for the care and preservation of the home during a time of transformation for others in the area.

In 1967, the next group of homeowners – Ronald Domanski and Norm Lindberg – were also instrumental in maintaining the home as well as its historic designation in 1977.

“They were amazed by the imaginative, theatrical and dramatic details of Queen Anne’s architecture. So they fixed it and were responsible for putting it on the National Register of Historic Places,” said Anders Christensen, president of the Healy Project.

Alongside Queen Anne hallmarks such as cross gables, trellises, a mix of building materials and stained glass, Healy was known for putting his personal stamp on things. These included domed Moorish stained glass laid over a single pane, as well as porches with turned columns and ornamental work beneath a cantilevered front pediment, Christensen said.

Healy was a master builder, which meant that he also built the houses he designed during this period. His specialty early in his career was Queen Anne homes in Lowry Hill and other areas of south Minneapolis.

“Builders all had their own way of siding a house with narrow or wide side walls and clapboards. Healy excels at the complexity of the designs,” said Christensen. “He took many classic historical elements and put them together in asymmetrical patterns that allow for an infinite variety of decorations – arches, towers, bays. They’re very complex, but they work together by balancing different traits.”

While previous homeowners had taken care of the home, it needed updating and continued restoration as aging homes do.

“Even though it was kind of a wreck, we thought it was salvageable because it was intact in a way,” said John, who founded the Cunningham Group architectural firm. “The core of the house was there.”

For one, 2 ¼ inch thick sliding wooden doors had survived. So does the original hardwood floors, other woodwork and moldings. Maple and oak predominately flowed through, while chestnut and cherry wood accented the spaces. Nine stained glass windows along with soaring 9- to 10-foot ceilings also made for a grand home.

The bones of the house were strong, too, including double-lapped walls with two coats of plaster to keep the house warm — and to date, kept heating costs down for a house of its size, John said.

The couple immediately set about replacing the roof, re-insulating the walls and re-sealing the plaster on the ceilings. Central air conditioning has been added.

“Each ceiling hung like a hammock,” he said of the cracks and sagging.

Project highlights include the porch, which received an updated, stable foundation. A neighbor who knew how to restore houses from the period helped make things like worn railings look brand new.

“It’s a wonder he was a woodworker who was my neighbor and he lived in a Healy House and fixed it too. So he knew what to do,” he said.

The kitchen was also upgraded. With the blessing of the historic group, the kitchen was demolished except for the stud farms. A wall has been removed to open up the kitchen and convert an adjoining office into a family room. An old chimney was removed.

There used to be no upper kitchen cabinets. So the Cunninghams installed new bespoke oak cabinets, which included glass doors as a nod to tradition. Updated appliances were installed, as well as maple block and green Vermont marble countertops. Adding a kitchen island and bringing original vintage hardware into the home completed the look.

“Everyone thinks the kitchen was originally like this, which is a huge compliment,” John said.

An en-suite bathroom has been added to the master bedroom. This and another bathroom on the second level featured marble splashbacks and floors.

The Cunninghams also restored the barn, which Christensen noted is one of three remaining on the Healy Block. A new foundation was constructed and new milled cladding was installed while historic features such as two horse boxes were retained.

In the midst of the renovation, the Cunninghams decided to move from their digs in Tangletown, the south Minneapolis house where they had lived for more than 46 years, to the home that John’s great-grandfather had built.

“I was planning on making some repairs and selling it, but at some point during the two years it took to fix the house, my wife and I decided we wanted to live there,” he said. “We fell in love with her.”

They enjoyed living in the house and appreciated the way it was built. The walls and doors are so thick that “it’s very quiet,” Sally said. The sliding doors were great for opening or closing a room, especially during the pandemic when someone needed to make a Zoom call.

The Cunninghams’ loving restoration of the home has paid off well beyond the opportunity to live and enjoy it. Their efforts have been recognized by the Minneapolis Heritage Preservation Commission, the Minnesota Chapter of the American Institute of Architects, and Preserve Minneapolis.

Now, after nine years, the Cunninghams have decided it’s time to downsize. They listed the three-story, five-bedroom, three-bathroom home in 3,375 square feet.

Listing agent Martha Hoover said the home is unique in its craftsmanship, family ties and attention to detail in the restoration. “The other unusual feature is the garage with horse stables and upper loft right in Minneapolis,” she added.

Sally Cunningham said the house has the potential to be added.

The second floor of the barn could be converted into an ADU or apartment. And in the attic of the house, which has a bedroom and a pool hall, they installed plumbing in case anyone wanted to add a bathroom.

But if new homeowners just want to move in and enjoy, they can do that too.

The large-scale listed projects have been completed.

And while this is a historic home, it should appeal to potential homeowners of all tastes. Just ask the Cunninghams, whose decor and decor style is contemporary.

“One of the things we were so pleased with is that you would think living in a historic home would be cramped,” John said. “What we found is that it’s very forgiving.”