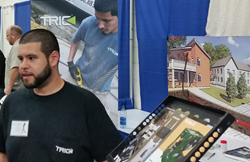 Jose in conversation with TRIC customers

Time flew by when we were with some of our happiest and best customers.

A number of TRIC customers attended the event. Both Mr. Battin and Mr. Moreno were busy answering questions about TRIC’s burst lining technology. “Time flew by when we were with some of our happiest and best customers,” said Jay Battin. Some TRIC owners also take active roles in the local and statewide PHCC offices that were also at the event: Steve Ferguson of Mr. Rooter; Ray and Dan Bonnetti from Bonnetti Plumbing; and Geno Caccia, CEO of James Caccia Plumbing. John McArthur from Leap Frog Plumbing, The Plumbing Ministry, Todd Rudy from RRSC / Mr. Drain, Albion Plumber, Albert Nahman and Harry Clark Plumbers were also in attendance.

In 1883, a group of 125 members in New York formed the National Association of Master Plumbers (NAMP) to provide the public with a complete, safe, and sanitary plumbing system. NAMP was the forerunner of the National Association of Plumbing-Heating-Cooling Contractors (NAPHCC), which later became the Plumbing-Heating-Cooling Contractors-National Association (PHCC). To this day, the PHCC consists of members and groups who share a common passion for their association and their industry in order to commit to fulfilling the PHCC mission of environmental protection and the safety of our society. To learn more about the organization or how you can get involved, please visit their website at: http://www.phccweb.org/.

The pipe bursting units from TRIC combine compact size and use enough power to blow up 4 “to 6” side pipes in one attractive package. TRIC has been a leader in providing side pipe burst equipment to contractors since 1996.

TRIC invented and patented the first practical Lateral Pipe Bursting System and at the same time received national approval of HDPE pipes for its use, thus opening the market for trenchless house sewer replacement in America. Since then, TRIC has expanded its arsenal to include urban cable pulling systems that always apply their formula of modular portability, including pneumatic and steel split heads that replace various pipe sizes from 1/2 “to 12” in diameter.

For more information on trenchless pipe bursting equipment, or the trenchless industry in general, please call 888-883-8742 or visit the TRIC website at: http://www.trictrenchless.com to see how these questions are answered for you can be. Get your trenchless sewer and water exchange on the right foot and help get your pipe bursting profitably.

Fashion designer revealed how she added £67,000 to the value of her doer-upper house

AA Plumbing Nominated for the “Best of the North” for 2021