When bushfires meet old septic tanks, a disease outbreak is only a matter of time 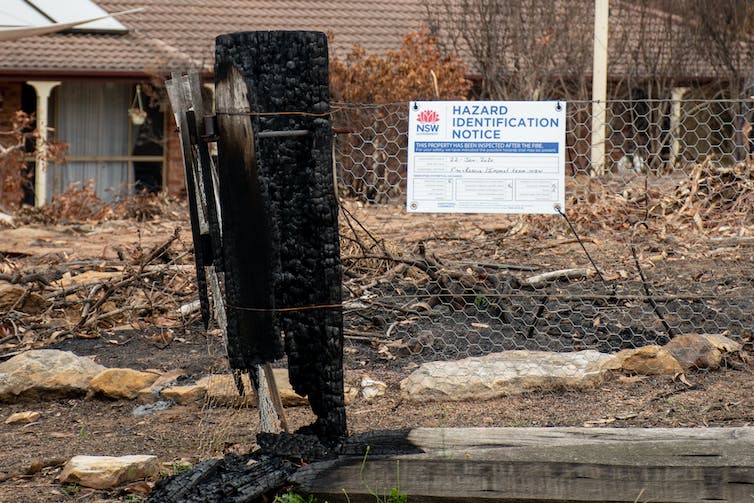 The Royal Commission on the Summer Fires is an opportunity to seriously rethink our built environment. We need to prepare for the acceleration of climate change, our changing natural landscape, and future natural disasters.

This should include a reassessment of our building standards and regulations. While the Royal Commission on Bushfires is addressing many of these issues, one that has so far escaped attention is the recently developed standard for wastewater treatment that is now being scrutinized by states and territories.

Widespread sewage systems in rural and regional Australia are vulnerable to natural disasters such as floods and severe bush fires. There is a real risk of waterborne disease outbreaks which would exacerbate the misery these catastrophic events cause.

It was just stupid luck that there was no outbreak of the disease last summer. The current standard, and even its proposed replacement, is insufficient to protect communities in a future where disasters from climate change worsen.

Water-borne disease outbreaks are a known threat of major flood disasters, particularly in developing countries. This is not common in Australia, although the 2011 Queensland floods resulted in a handful of cases of the water-borne bacterial disease leptospirosis.

While there are no major disease outbreaks after bushfires, it is a preventable accident waiting to happen as bushfires become more common and intense in Australia.

Damage to septic tanks is a major threat to people returning to their property after a bush fire burns out.
Shutterstock

In Sydney 95% of homes are connected to sewers, while in the rest of New South Wales it is 93%.

Those who are not connected to these “trunk channels” generally use the septic tank. This applies to both communities on the outskirts of our cities and regional cities, including many in fire-prone areas.

A septic tank is essentially a large underground chamber for holding liquid waste. Solids fall to the bottom and are digested anaerobically, with microorganisms breaking down matter in the absence of oxygen. This releases gases that are released into the atmosphere while liquids are released into the soil. The sludge at the bottom of the tank needs to be pumped out every few years.

Damage to septic tanks is one of the greatest health risks people face when they return to their bushfire-hit homes. For example, the Eurobodalla Shire Council in NSW even offered free wastewater management system reviews for residents with septic tanks to mitigate this risk.

Why septic tanks are so vulnerable

The standard septic tank uses a form of waste treatment known as an aerated sewage treatment system. These need electricity to work and also have important components such as electronic grid boards above the ground.

Without electricity, they effectively just hold tanks that can overflow and release untreated wastewater into the surrounding area and waterways. This can lead to bacterial diseases such as salmonella, viral diseases such as hepatitis A or gastroenteritis, or diseases caused by parasites such as Giardia. COVID-19 can also be transmitted through sewage. 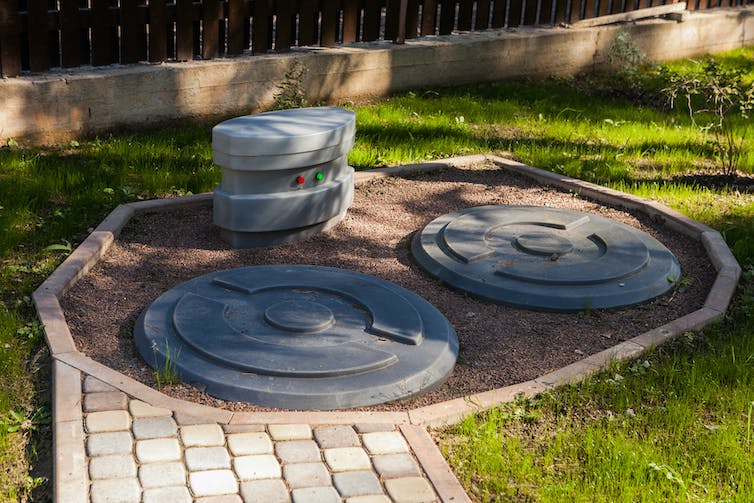 Electricity is particularly susceptible to disasters – all the more so when the components are above and not below the ground. In January, at the height of the bushfires, around 50,000 households were hit by blackouts in southeast New South Wales alone. On average, the power outages lasted three and a half days.

Most on-site waste treatment systems have a regulated 1,000 liter emergency overflow container. That would only take a couple of days to fill up. Thereafter there is a health risk from the escape of wastewater.

Safety experts and environmental scientists are increasingly concerned about the new standard (AS1546.3.2017) recently developed by Standards Australia. It is based on ancient technology that is both wasteful and unsafe.

It’s wasteful because it requires wastewater treatment systems with a minimum capacity of 1,200 to 5,000 liters per day – a size designed to treat the waste of eight to 33 people. However, the average Australian household is only made up of 2.6 people.

Read more: After the Firestorm: The Health Effects of Returning to a Bushfire Zone

While the size makes them safer – as they can last longer before overflowing – the weak point is the need for above-ground power services. Above-ground systems are destroyed by the kind of catastrophic fires we saw last summer and can be crippled by floods or cyclone winds.

On the other hand, underground structures are protected by the earth from the radiant heat of fires, the rushing water of floods and the extreme wind gusts of cyclones.

We need to upgrade the sewer system

For this reason, we have to change the standards for septic tanks to newer, so-called “passive” systems, which are widely used overseas and can work safely for fewer people.


How these passive systems work.

These new plants have many advantages over the old technology, including the use of less fossil fuels to operate. The biggest advantages, however, are that they do not use electricity and are completely underground with no above-ground operational components or potentially risky wastewater distribution.

This means that they have a built-in resilience to the types of natural disasters we face in Australia: bush fires, floods and cyclones.

A standard like AS1546.3.2017 does not meet the goal of more resilient and more environmentally friendly neighborhoods and communities. Such a standard should not exist in a country that is aware of its environmental obligations and is prepared for further natural disasters in the coming years.

Portion of Cherokee Parkway to close for 4 weeks | News